Clarksville, TN – For the first time this season Austin Peay State University (APSU) women’s basketball is set to hit the road for an Ohio Valley Conference matchup, when they play a 4:00pm, Thursday, contest against Tennessee Tech that will be aired nationally on ESPNU. 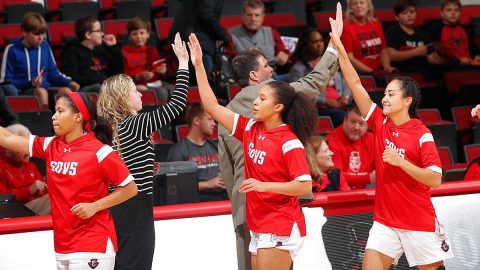 Ten different OVC basketball games are scheduled to appear on the ESPN Family of Networks, with only one women’s game appearing on the slate.

That women’s game will feature the Governors taking on one of their longest-tenured opponents in the league, Tennessee Tech.

After the Governors Thursday night tilt in Cookeville, they will travel farther south for a 1:45pm, Saturday, matchup against Jacksonville State.

Tennessee Tech is one of the most balanced teams in the OVC, as they are the only squad that ranks in the top-three in both scoring offense and scoring defense. The Golden Eagles balanced attack has allowed them to accumulate an OVC-best plus 11.8 scoring margin.

In the preseason polls, the OVC coaches and SID’s gave the Golden Eagles a single first-place vote, but ultimately tabbed them to finish third in the conference. In the media poll, Tennessee Tech received two first place votes, but were still projected to finish second in the league. The Golden Eagles are coached by the reigning OVC Coach of the Year, Kim Rosamond, and they return 2018-19 All-OVC First Team selection Jordan Brock. Brock is averaging 9.4 points per game in her junior campaign.

On the offense end, a pair of juniors, Kesha Brady and Mackenzie Coleman, have led the Golden Eagles. Brady is averaging a team-high 15.1 points per game, which is good for sixth best in the conference. Coleman averages 11 points per game, but is shooting an OVC-best 60 percent from the floor.

Tennessee Tech enters Thursday’s game against the Governors on a five-game winning streak. The Golden Eagles are outscoring teams by an average of 21.4 points per game on that streak, thanks in part to a 94-45 drubbing of Tennessee Wesleyan, December 29th.

Austin Peay State University and Tennessee Tech last met in the first round of the OVC Women’s Basketball Championship in Evansville, Indiana. The Governors season ended after falling to the Golden Eagles, 68-57, on March 7th, 2019.

Austin Peay State University leads the OVC in three-point field goals made (121) and three-pointers attempted (366). They are tied with Tennessee Tech for the conference lead in three-point percentage (33.1%).

The Governors rank second in the Ohio Valley Conference in scoring offense (72.2 ppg).

Nationally, the Govs rank 9th in three-point field goals made per game (9.3).

The APSU Govs have deployed a full-court press this season, leading to 22 turnovers forced per game. That ranks 17th in the NCAA and leads the OVC.

The Governors own an OVC-best plus 4.77 turnover margin and are the only team in the conference that averages 20 or more forced turnovers per game.

Senior Arielle Gonzalez-Varner [3] posted a season-high 22 points last time out against UT Martin, January 4th — her third 20-point performance of the season and the sixth of her career.

In OVC play, Ella Sawyer [5] leads freshman in scoring, averaging 12.5 points per game — she matched her career high with 16 points in her OVC debut against Southeast Missouri, January 2nd.

Gonzalez-Varner is averaging 18.5 points per game and is shooting 68.2 percent from the floor in conference games.

Despite trailing 21-63 in the all-time series against Tennessee Tech, the Governors are 4-2 against the Golden Eagles under head coach David Midlick [6] — including back-to-back wins in the regular season.

Check back at LetsGoPeay.com and on Austin Peay State University’s Official Athletics Facebook page often for up-to-date news about all APSU Governor Athletics, as well as the Governor women’s basketball Twitter page (@AustinPeayWBB). Live stats will be available during the game at PeayStats.com, and all home games and Ohio Valley Conference games can be viewed on the ESPN+ app.