Cookeville, TN – For three quarters, the Austin Peay State University (APSU) women’s basketball team held the lead over Tennessee Tech, but an untimely stretch of cold shooting in the fourth quarter did the Governors in, as they fell, 58-49, Thursday in the Eblen Center. 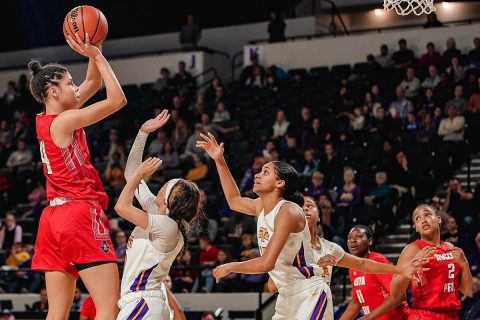 The senior from Cincinnati is the Ohio Valley Conference’s leading offensive rebounder – averaging 4.2 per game – and that’s where she did the majority of her damage against Tennessee Tech (10-4, 3-0), pulling down six offensive rebounds.

Tahanee Bennell [2], who made her first start since December 1st, led the initial charge for the Governors. Bennell hit a runner in the lane to start the contest, before knocking down a three-pointer two possessions later to give the Govs a 7-0 lead and force a Tennessee Tech timeout. Bennell and Gonzalez-Varner combined for nine first-quarter points to give the Governors an 11-8 lead at the end of the first 10 minutes.

Neither team was able to get it going on the offensive end in the second quarter, combining for just 20 points. But after the first 20 minutes of action, the Governors held a five-point advantage.

Both teams turned it up a notch in the third quarter, and it was the aggressive play in the paint of D’Shara Booker [3] that helped the Govs maintain their lead. Booker scored five of her nine points in the third, with her biggest contribution of the period coming off an offensive rebound, which led to a three-point play.

With the game tied, Booker was able to get to the line on the next possession, knocking down two free-throws to give the APSU Govs the lead back. A pair of defensive stops led to a Bennell layup at the buzzer to extend the Governors lead to four heading into the final quarter.

The fourth quarter was a struggle for the Governors offense, which could never get it going from the floor. The Govs were able to get to the free-throw line in the fourth, where they did the majority of their scoring, going 6-of-6 from the charity stripe.

With 7:58 remaining, the Governors only trailed by a possession, but the ensuing 16-4 Tennessee Tech run that spanned the next five minutes gave the Golden Eagles a 14-point lead from which the APSU Govs could not recover.

The fourth quarter. Tennessee Tech shot 54.5 percent from the floor and 62.5 (5-of-8) percent from three-point range in the final ten minutes. The Golden Eagles outscored the Governors 23-10 in the fourth, to erase a lead that Austin Peay State University had held for nearly the entire first three quarters.

Arielle Gonzalez-Varner [1] posted her fifth double-double of the season and the 12th of her career, with 10 points and 11 rebounds.

Tahanee Bennell [2] scored in double-figures for the first time since she posted 15 points against Binghamton, December 19th – she knocked down a team-high two three-pointers.

For the first time this season, the Governors lost a game where they committed fewer turnovers and out-rebounded their opponent.

The Governors will continue their four-game OVC roadtrip with a 1:45pm, Saturday, matchup at Jacksonville State (6-8, 2-1). The Gamecocks enter Saturday’s contest on two-game winning streak, having knocked off Murray State, 68-51, on Thursday at Pete Matthews Coliseum.