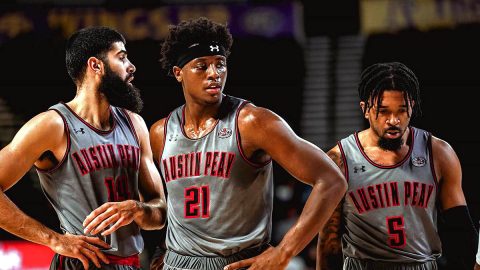 The Govs looked the part early, needing less than four minutes to build out an 11-3 lead.

Both teams went cold for a lengthy part of the first half, with the Governors scoring drought reaching nearly eight minutes before a Terry Taylor [1] bucket.

The good news is that the Govs quickly righted the ship; the better news is that Tennessee Tech struggled nearly as much while Austin Peay State University was off its offensive game, meaning the Golden Eagles never took so much as a lead while the Govs were finding their collective shooting touch.

After that, the lead stayed near double-digits for the half’s remainder. The Governor offense, without Taylor after he picked up a second foul, had its share of fits and starts but with the steady presence of Jordyn Adams [2] always had someone to look to if a play broke down. He had a dozen in the first half, including a three late to push the lead to 15 points with 2:39 to go.

Tennessee Tech embarked on a late 8-1 run and appeared destined to take a single-digit deficit into the locker room, but Carlos Paez [3] knocked down a three with under 10 seconds to go to send Austin Peay State University into the break up 35-24. It was just the second bucket for a Gov not named Adams, Taylor or Eli Abaev [4], who scored 29 of Austin Peay State University’s 35 first-half points.

The second half was more of the same. Taylor got his, because he’s the OVC’s Preseason Player of the Year and he’s already racked up 1,500 career points and he’s just an incredible, generational talent; he finished with 27 points and 12 boards, but on any given night he can more or less pick his number.

This 9-0 Golden Eagle run may have stretched nearly six minutes, but the last half of it Tennessee Tech was scoreless as well, allowing the Govs to escape relatively unscathed from another lengthy round with their shooting demons.

Taylor was supplemented by another 20-point effort from Adams, while both Paez and Antwuan Butler [6] reached double figures with 10 points.

First half shooting. Other issues from the floor aside, the Govs built the early lead which allowed them to weather two different scoring droughts. It helped that Austin Peay State University hit 46.7 percent over the first 20 minutes, compared to 38.1 percent by the Golden Eagles.

The Govs are outscoring opponents 17.0-7.3 in second-chance points over the last three games.

Austin Peay State University is 8-0 when outshooting its opponent in 2019-20 and is now hitting 52.4 percent from the floor in victories this season.

The Austin Peay State University bench was held scoreless for the first time this season.

[320rihgt]The Govs hauled in double-digit steals for the second game in a row, finishing with 10 as a team. It’s the first time Austin Peay State University has posted back-to-back double-digit steal efforts since Jan. 26-31, 2019. Abaev posted a career-high five steals by himself, equaling the season-best by a Governor.

The APSU Govs are 3-0 in league play for the third consecutive season.

Austin Peay State University has won back-to-back games in the Eblen Center for the first time since 2007-09.

On rotation
“I’m comfortable with the lineup I’m going with. I’m getting more comfortable with some of the substitution patterns. I’d still like an eighth or ninth guy to be consistent, but I knew in order to win this game on the road, I had to go with the guys I trust the most. I couldn’t leave anything to chance. We needed a road win.”

On the road win
“Winning on the road is hard. I don’t care where you play at. In order to compete in this league, you’ve got to win your home games and then you’ve got to go on the road and find a way to get it done. It wasn’t pretty at times from a turnover standpoint, but we were able to sustain their run because we’d built a big enough lead and that’s what you have to do on the road. You know adversity is coming and you have to handle it.”


Next Up For Austin Peay State University Govs

Austin Peay State University men’s Basketball is off to Jacksonville, Alabama to take on Jacksonville State in a 4:00pm, Saturday tilt at Pete Mathews Coliseum. The Govs are 3-0 against the Gamecocks under Figger.