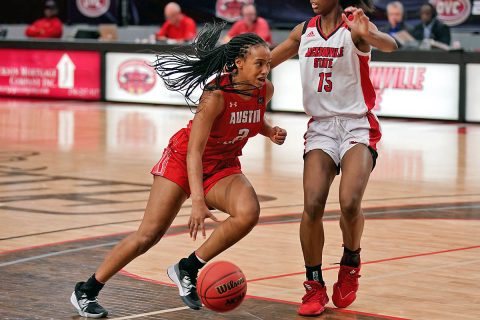 The teams matched each other bucket-for-bucket through the first ten minutes, and the score was tied 14-14 after one quarter.

Jacksonville State scored first in the second half to erase the APSU Govs lead and tie the game at 33. While the Gamecocks took the lead on their next possession, the Governors never let them extend their lead, thanks in part to another solid performance off the bench from D’Shara Booker [3]. Booker scored four of her eight points in the third quarter, with two points coming on a putback after she pulled down an offensive rebound – cutting the Gamecock lead to one.

The Governors could never quite erase the narrow Jacksonville State advantage in the third quarter, but they fought hard to stay within striking distance heading into the final ten minutes of action.

A 5-2 run to start the fourth quarter was capped by a Booker jumper that gave the APSU Governors their first lead since the start of the second half. The two teams went scoreless for the next 3:21, before a Taylor Hawks layup gave the Gamecocks a one-point advantage. But the Govs didn’t trail for long, as Kasey Kidwell [4] drove hard to the rim and finished through contact to take the lead right back.

The Governors wouldn’t trail the rest of the way, as Arielle Gonzalez-Varner [5] got a steal which led to a fast-break layup on the next possession. Another Gonzalez-Varner bucket the next trip down the floor gave the Govs a five-point advantage with 1:15 left in the contest. With the Austin Peay State University Govs leading and less than a minute remaining, it came down to free-throws. Ella Sawyer [1] knocked down three free-throws in the final 40 seconds to put the game on ice and give the Governors their first win in OVC play.

The APSU Governors picked up their first win against Jacksonville State since January 7th, 2016 in Clarksville.

The Govs ended a three-game losing streak, picking up their first conference win.

Ella Sawyer [1] scored a game-high 14 points to lead the Governors in scoring for the second time in OVC play and her career.

The Governors made a season-low three three-pointers, but scored 36 points in the paint to supplement the offense.

The APSU Govs outrebounded (41 to 33) and forced more turnovers (14-11) than their opponent for the second straight game.

Gonzalez-Varner did not score in double-figures for the first time in five games.

The APSU Governors continue their four-game OVC road trip with a 5;15pm, Thursday, tilt against Southeast Missouri. After the Govs matchup in Cape Girardeau, Missouri, they will make a stop in Martin for a 2:00pm, Saturday, contest against the Skyhawks of UT Martin.

The Governors lost to Southeast Missouri and UT Martin at home in the first week of OVC play, and will look to return the favor when they hit the road this week.