Knoxville, TN – A strong defensive effort and a drawn charge by John Fulkerson [1] in the closing seconds propelled the Tennessee Vols basketball team to a 56-55 win over South Carolina Saturday at Thompson-Boling Arena.

With Tennessee leading by one with six seconds remaining, South Carolina guard A.J. Lawson grabbed the rebound off a UT missed 3-pointer and raced the length of the court to attempt a go-ahead shot. As Lawson drove down the lane, Fulkerson stepped in front and drew a charge with 1.4 seconds remaining, giving the Vols possession and securing the win. 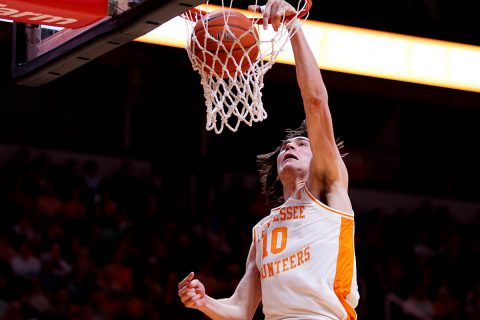 Fulkerson led the Vols in scoring with 15 points and also grabbed 10 rebounds, achieving the second double-double of his career and first of the season.

Defensively, Tennessee (10-5, 2-1 SEC) held its opponent to less than 60 points for the seventh time this season and recorded a season-high 11 blocked shots.

After coming out of halftime with a one-point lead, South Carolina opened the second half on a 13-6 run, as Tennessee converted on just two of its first nine attempts from the field.

With the Gamecocks holding their largest lead of the game at 39-31, the Vols came alive on the offensive end with a 20-5 run, capped by back-to-back threes from the freshman duo of Drew Pember [4] and James. The run put Tennessee in front, 51-44, a lead it would not relinquish for the remainder of the game despite South Carolina threatening on multiple occasions.

Over the course of the run, Tennessee held South Carolina without a field goal for more than six minutes, as the Gamecocks missed 10 consecutive shots.

South Carolina took a 26-25 lead into halftime in a first half marred by scoring droughts and shooting struggles. The Vols shot just 7-for-27 (.259) from the field during the game’s opening period.

After jumping out to a quick 7-0 lead during the game’s first minute and a half, Tennessee went more than 10 minutes of game time without making a field goal. As a result of Tennessee’s scoring drought, South Carolina seized a 16-10 lead that the Vols responded to with a 9-0 run to go back in front.

From there, the lead changed hands once more as the Gamecocks executed an 8-2 run over the course of the half’s final four and a half minutes to take the slight advantage into the break.

From The Line
The Tennessee Vols gained some separation in the second half at the free-throw line, shooting 14-for-16 from the charity stripe. Tennessee’s 22 made free throws were its second-most of the season.

Yve’s Streak Continues
Yves Pons’ [6] five-block performance was his third straight game with three or more blocks, marking the first time a Vol has accomplished that feat since Kyle Alexander [7] in December 2017. Pons has eight games this season in which he has recorded three or more blocks.

Pons has also now blocked at least one shot in all 15 of Tennessee’s games this season.

Next Up For Tennessee Men’s Basketball

The Tennessee Vols basketball team hits the road and head down to Athens, Georgia, for a Wednesday night tilt with Georgia at Stegeman Coliseum. The game tips off at 6:00pm CT and will be televised on ESPNU.