Clarksville, TN – The semester starts next week, but Austin Peay State University (APSU) track and field will continue what has already been a busy indoor session with a journey to this weekend’s Samford Indoor Clash in Birmingham, Alabama. 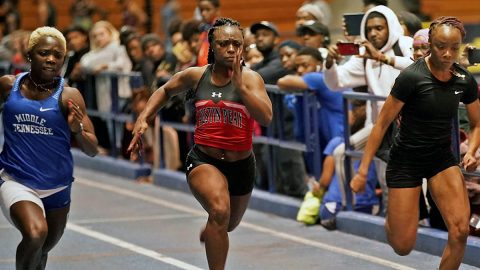 This meet will feature a plethora of Division I teams at one of the south’s finest facilities—the Birmingham Crossplex will once again host the Ohio Valley Conference Indoor Championships in February.

The big question is, “Where will we see Kenisha Phillips [1] this week?” We’re happy to report she’ll be returning to the 60m dash in pursuit of sole possession of the school record she equaled in her first career run as a Gov back in December. While she’ll get her first chance to take over the top spot on her own, junior Sabrina Richman [2] will compete in the 400m dash looking to reclaim her spot atop the league standings.

Late Friday action will feature a 200m dash that will see the APSU Govs send out Phillips and Tymeitha Tolbert [3]—two of the four Governors currently among the league’s top-five in the event.

Junior Lennex Walker [4] will be busy this weekend. The do-it-all dynamo will compete in the 60m hurdles and represent Austin Peay State University in both the long jump and triple jump—she’ll look to extend her league lead in the hurdles, improve her top-five standing in the triple and break into the league’s upper-echelon in the long.

Entering the weekend, freshman Karlijn Schouten [5] is the reigning OVC Indoor Field Athlete of the Week; she and junior Morgan Bradley [6], who also ranks among the league’s top-five performers in the pole vault, will battle a large field featuring Samford’s Jackie Barnes, a top-75 performer among the NCAA.

The 200m is the only event slated to go Friday night featuring a Governor; the bulk of the action for Austin Peay State University begins 8:00am, Saturday, in Birmingham. Live scoring will be provided via XPressTiming.com.