Nashville, TN – The Tennessee Titans and the Kansas City Chiefs are historic rivals that played an integral role in the formation of the current NFL landscape.

In 1959, late Titans owner K.S. “Bud” Adams, Jr. and the late Lamar Hunt, founder of the Chiefs, spearheaded the “Foolish Club,” a group of eight original American Football League teams that would begin play in 1960. 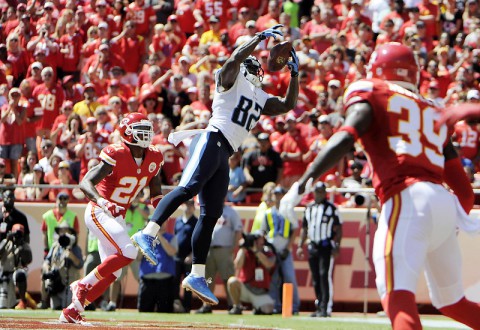 Adams’ Oilers played in Houston until moving to Tennessee in 1997, while Hunt’s original Dallas Texans moved to Kansas City in 1963. In 1970, the AFL and NFL merged, and the Oilers and Chiefs became members of the American Football Conference.

The Titans and Chiefs have met 53 times (regular season and postseason), with the Chiefs leading the series, 29-24.

After a four-game winning streak from 1990-93, the Titans lost seven out of 10 against the Chiefs until taking the last four contests, including three consecutive wins at Arrowhead Stadium.

The most recent time the clubs squared off in Kansas City was when the Chiefs hosted the Titans in a wild card game on January 6th, 2018. The Titans trailed 21-3 at the start of the second half but came back to win 22-21, tying the second-largest comeback by a road team in NFL playoff history. Running back Derrick Henry set a then-franchise playoff record with 191 scrimmage yards, while quarterback Marcus Mariota completed two touchdown passes, including one to himself on a deflected pass.

On December 18th, 2016, the Titans played their coldest game in franchise history, with a kickoff temperature at Arrowhead Stadium of 1 degree. Ryan Succop nailed a 53-yard field goal as time expired to give the Titans the win.

Tennessee is 2-2 against the Chiefs at Nissan Stadium, including a 35-32 victory on November 10th, 2019 in the most recent meeting at the Titans’ home. Ryan Tannehill’s 23-yard touchdown pass to wide receiver Adam Humphries gave the Titans the lead with 23 seconds on the clock, and then defensive back Joshua Kalu preserved the win by blocking a potential game-tying 52-yard field goal attempt as time expired.

Prior to their 2017 wild card battle, the two franchises have played two other playoff games, and the Chiefs were victorious both times. They met on December 12th, 1962 in the third AFL Championship Game, a contest won by the then-Dallas Texans over the Oilers on a Tommy Brooker field goal in double overtime. On January 16th, 1994, Kansas City’s Joe Montana completed three touchdown passes in the second half to help defeat Warren Moon and the Oilers 28-20.

2014 Week 1 • Sept. 7, 2014 • TITANS 26 at Chiefs 10
The Titans use two touchdown passes by Jake Locker and four field goals by Ryan Succop in a season-opening win. Succop returns to Arrowhead Stadium eight days after being released by the Chiefs. Jason McCourty records two of Tennessee’s three interceptions. The Titans combine to rush for 162 yards and record a 37:44 time of possession. The defense records four sacks as the Chiefs go 1-of-12 on third down.

2016 Week 15 • Dec. 18, 2016 • TITANS 19 at Chiefs 17
Ryan Succop boots a game-winning, 53-yard field goal as time expires. The kickoff temperature of 1 degree makes it the coldest game in franchise history. Marcus Mariota engineers three consecutive scoring drives to end the game after the Titans trailed 17-7 entering the fourth quarter. The Titans overcome three turnovers. Derrick Henry scores both Tennessee touchdowns. Tyreek Hill scores on a 68-yard run for the Chiefs early in the first quarter. The Titans defense shuts out the Chiefs in the second half.

2017 Wild Card • Jan. 6, 2018 • TITANS 22 at Chiefs 21
Titans score 19 unanswered points to erase an 18-point deficit in the second half. Derrick Henry rushes for 156 of the team’s 202 rushing yards. Marcus Mariota completes a six-yard touchdown to himself on a batted pass and adds a game-winning touchdown pass to Eric Decker in the fourth quarter. The Titans defense shuts out the Chiefs in the second half, allowing three first downs and 61 yards in the final two quarters.

2019 Week 10 • Nov. 10, 2019 • Chiefs 32 at TITANS 35
Ryan Tannehill completes a game-winning 23-yard touchdown pass to Adam Humphries with 23 seconds remaining in the fourth quarter. The Chiefs fail on two potential late field goals, including an aborted play and Joshua Kalu’s block of Harrison Butker’s 52-yard attempt. Derrick Henry rushes for 188 yards and two touchdowns, including a 68-yard score. Linebacker Rashaan Evans scores on a 53-yard fumble return. Patrick Mahomes returns from injury to lead the Chiefs with 446 passing yards, the most allowed by the Titans in franchise history.