Louisville, KY – Austin Peay State University (APSU) men’s tennis hit the road to take on Louisville in the 2020 spring season opener, the Governors fell to the Cardinals, 4-0, Saturday at the Bass-Rudd Tennis Center. 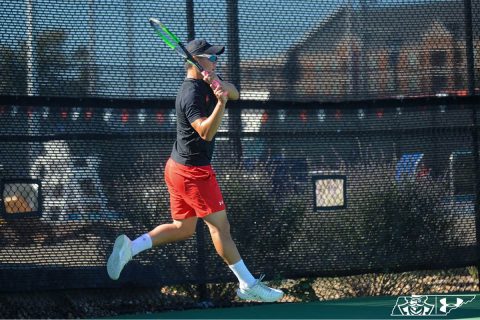 In doubles action, APSU’s junior duo of Jacob Lorino [1] and Christian Edison [2] played in the No. 1 position, where they fell to Louisville’s Sergio Hernandez and Fabien Salle.

In the No. 3 doubles match, Oliver Andersson [3] made his season debut, after not competing during the fall season. Andersson and freshman Thiago Nogueira [4] fell to the Cardinals pairing of James Bell and David Mizrahi, 6-2.

In the closest doubles match of the day, the Govs duo of Anton Damberg [5] and Julius Gold [6] had played Louisville’s Alex Wesbrooks and Matthew Fung to a 4-3 unfinished match.

Gold and Lorino played in the next two positions for the Governors, playing two of the three finished singles matches of the day. Gold fell to Fung, 6-4 6-0, and Lorino dropped his match to Louisville’s Clement Filho, 6-0 6-0.

In his return to action, Andersson was slotted in the No. 5 spot for the Governors. Andersson dropped the first set, 6-2, and was locked in a 4-3 battle in the second set when the match was ended. Nogueira played in the final singles position for the Governors, he fell to the Cardinal’s Wesbrook, 6-0 6-1.

On the season opener
“Opening up the season against Louisville, who has a high quality team, was a challenge for our men. Our doubles play was a little passive at times, but we had some good competitive matches in singles. ”

On the Govs
“Christian [Edison] played as our number one and lost the first set in a tie breaker; and it’s awfully good to have Oliver Andersson [3] back in our lineup after a year break, I was impressed with his play.”

Moving forward
“The key for success this season will be for us to improve our players by working extremely hard and maintaining a positive attitude. We have another tough match coming up on Monday [at Middle Tennessee], and I am looking for improvement in both doubles and singles.”

Next Up For APSU Men’s Tennis

The Austin Peay State University Men’s Tennis will continue their three-game season-opening road trip with a pair of matches in the Volunteer State this week. First, the APSU Govs will play a 5:00pm, Monday, match in Murfreesboro against Middle Tennessee, then they will play a 6:00pm, Friday, match against Lipscomb in Nashville.

The Govs will finally return home for a match at the Governors Tennis Center when they host a 1:00pm, January 25th, match against Chattanooga.