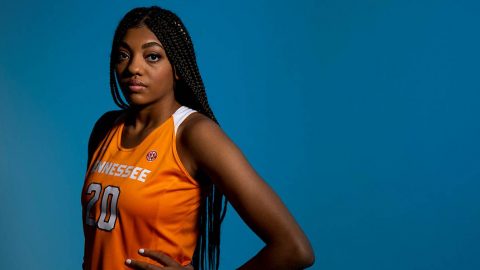 This will mark the 23rd meeting between these programs, who have combined to win 19 NCAA national championships and 2,538 games.

The occasion will present the first-ever match-up between Kellie Harper [1] and Geno Auriemma as head coaches.

The last time these teams faced off, they played in the same venue on January 6th, 2007, with UT taking a 70-64 decision. The Lady Vols own a three-game win streak in the series with the Huskies, but UConn holds a 13-9 advantage in all games.

ESPN’s studio crew will be on site as well and will include Maria Taylor, Tamika Catchings (LVFL) and Sue Bird (UConn alum).The contest also can be heard on Lady Vol Network radio stations and by audio stream, with Mickey Dearstone calling the action for the 21st season and Bobby Rader serving as the studio host.

Tennessee Lady Vols basketball team enters on a four-game winning streak and moved into second place in the SEC standings with wins over Florida (W, 78-50) last Thursday and Alabama (65-63) on Monday night. UT has won seven of its last eight.

The Tennessee Lady Vols face three games in seven days this week, and they used a Rennia Davis [3] buzzer-beater to fend off an Alabama team on Monday night that had seven days to prepare for Tennessee, 65-63.

This will mark the fourth ranked team the Big Orange have faced in 2019-20. UT’s only losses this season are to (then) No. 1/1 Stanford, Texas and (then) No. 13/13 Kentucky. The Lady Vols defeated Notre Dame, which was ranked #15/14 when the teams played in November.

UConn also enters having won four in a row, bouncing back after suffering its only loss of the campaign on January 9th to No. 6/6 Baylor, 74-58.

Including the UConn game and an LSU squad that is receiving votes, UT has a stretch coming up that includes games at No. 1 South Carolina (February 2nd), vs. No. 9 Mississippi State (February 6th), at LSU (February 13th), vs. No. 15 Texas A&M (February 16th) and at No. 21 Arkansas (February 20th).

UConn plays next at East Carolina on January 25th. The Huskies have a date in Hartford with the U.S. National Team on Jan. 27 and have marquee non-conference match-ups vs. No. 4 Oregon (February 3rd) and at No. 1 South Carolina (February 10th).

The junior forward’s heroics helped the Lady Vols end a five-game losing streak to the Crimson Tide and provide Kellie Harper [1] her 300th career victory as a head coach.

Freshman Jordan Horston [4] led Tennessee (15-3, 5-1 SEC) in scoring with 19 points and eight rebounds. Davis also had another strong showing, connecting on seven of 11 shots from the field, including her only three-point attempt, to finish with 16 points and nine rebounds.

Jasmine Walker had a double-double for Alabama (11-7, 1-4 SEC), tallying 14 points and 10 rebounds, while Jordan Lewis led the team in scoring with 17 points.

In the last two minutes alone, there were seven lead changes and two ties before the clock hit zero.

Block Party
Tennessee recorded a season-high 13 blocked shots against Alabama. That total tied for third all-time by the Lady Vols. The effort was led by freshmen Tamari Key [6] and Jordan Horston [4], who combined for 10. Horston blocked a career-high four shots, while Key tied her career high of six blocks. Key has blocked 29 shots in conference play, leading the SEC with an average of 4.8 bpg.

Have Yourself A Game, Horston
Freshman Jordan Horston [4] scored a game-high 19 points while adding eight rebounds, four assists, four blocked shots and a steal to her stat line. She has scored in double figures in seven of the last eight games and led the team in scoring on two occasions this season.

Big On The Boards
The Tennessee Lady Vols out-rebounded the Crimson Tide, 45-31. UT has now out-rebounded 16 of 18 opponents and ranks second in the nation in rebounding margin at +15.4.

Tops In The SEC
The triumph over Alabama was UT’s 400th SEC regular season victory. That total ranks first in the league by more than 90 wins.

The Tennessee Lady Vols are allowing opponents only 31.0 percent shooting from the field and have allowed only No. 1/1 Stanford (42.6), Missouri (40.4) and Kentucky (40.0) to shoot better than 39% this season. Eight opponents have failed to shoot 30 percent vs. Tennessee, including Ole Miss, which shot 18.5 percent on January 9th. That was the lowest percentage since January 8th, 2012, when Arkansas shot 18.2 percent.

The Lady Vols are averaging 10 blocks a game over the last three contests.

Tamari Key [6] is responsible for 5.0 of those per contest during that span.

The Shots Are Falling

Tennessee has shot for a higher percentage than its opponent from the field in every game except for the Texas and Stanford match-ups, in which the Longhorns knocked down 36.2 to UT’s 30.6 percent and the Cardinal prevailed, 42.6 to 27.8.

UT is shooting 50.9 percent from the field and 43.5 on threes the past three games.

Tennessee shoots 45.9 from the field for the season and has hit better than 46 percent in seven of its last eight games, including four where it shot 50 or better.

UT is knocking down shots at a 49.6-percent rate during league play to lead all schools.

The Lady Vols are shooting 33.5 percent on threes for the season, but getting up extra shots is paying off in conference play. The Lady Vols are now connecting on 41.0 percent (32-78) of treys during league play.

Over the last three games, Lou Brown [8] is hitting 63 percent of her shots and 50 percent on threes for 8.3 ppg. Jazmine Massengill [9] hit five of nine threes for 55.6 percent.

Tennessee has recorded 14 or more assists in every game but one this season (Stanford, 7) and has tallied 20 or more on six occasions.

UT is 7-8 vs. the Huskies during regular-season encounters and 2-5 during the postseason.

The Lady Vols are 2-3 in games played in Hartford and 2-1 in contests held on campus in Storrs.

Kellie Harper [1] has never met UConn as a head coach, but she was 4-1 vs. the Huskies in games she played as a Lady Vol.

Harper (then Jolly) had 19 points and three assists vs. the Huskies in the 1997 Midwest Regional Final in Iowa City.

Tennessee played against redshirt senior Evelyn Adebayo last season when she was at Murray State University.


About The UConn Huskies

Freshman Anna Makurat added a season-high 21 points and Crystal Dangerfield scored 16 for the Huskies (16-1, 7-0), who have won all 109 regular-season conference games and all six AAC tournaments since leaving the Big East for the American.

Christyn Williams and Aubrey Griffin each had 11 points.

UConn was coming off two relatively close road wins, beating Memphis by 12 and UCF by seven.

But the Huskies scored the first seven points against Tulsa, jumped out to an 11-2 lead and never trailed.

Candace Parker left an emphatic mark on Tennessee’s storied rivalry with UConn, turning in a 30-point, 12-rebound double-double and dunking at the Hartford Civic Center as the No. 4 Lady Vols held off No. 5 Connecticut, 70-64, on January 6th, 2007.

The slam, which came early in the second half, ironically ignited the Huskies into a 31-15 spurt that would tie the game at 60 with 4:04 to go.

The Lady Vols, however, were able to wrestle back the lead and keep it for good in winning for the third straight time over UConn.

Parker hit 12 of 22 shots from the field and six of nine tries from the free throw line. She added six blocks, four assists and a steal while playing all 40 minutes.

Sidney Spencer was the only other Lady Vol in double figures, just missing a double-double of her own with a 14-point, nine-board effort.

The Lady Vols scored 22 points off 14 UConn turnovers and got 65 of their 70 points from their starters.

UT hit 37 percent from the field, but its seven of 17 shooting (41.2) from the three-point arc proved to be the difference.