Clarksville, TN – After a pair of road matches to start the spring season, the Austin Peay State University (APSU) men’s tennis will hit the road once more for a 6:30pm, Friday, January 23rd, 2020 match at Lipscomb before finally welcoming Chattanooga to the Governors Tennis Center for a 1:00pm, Saturday, home-opening match. 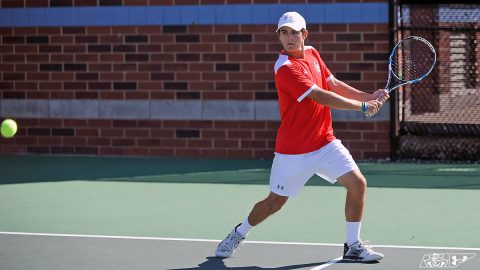 The Austin Peay State University Governors have dropped a pair of tough matches to start the season, falling to Louisville, 4-0, and Middle Tennessee, 7-0.

The Governors will look to get things back on track with a quick trip down I-40 to take on Lipscomb, Friday night.

The Govs have rolled out the same lineup in both of their matches so far this season, with the junior-duo of Christian Edison [1] and Jacob Lorino [2] playing as the No. 1 doubles pairing twice. Anton Damberg [3] and Julius Gold [4] have been teamed up in the No. 2 doubles position, while Oliver Andersson [5] and Thiago Nogueira [6] have manned the No. 3 doubles position.

The Bison started their season with a convincing win over Appalachian State, 6-1, on January 18th. Lipscomb is led by senior Victor Chaw, who was named the ASUN Men’s Tennis Player of the Week for the first week of the season.

The Mocs started their season on the road in Tuscaloosa, Alabama, where they fell to Alabama, 6-1. Since then the Mocs have reeled off back-to-back 6-1 wins over Appalachian State and Union College (KY). Chattanooga is led by senior Niklas Gerdes, who was named the SoCon Men’s Tennis Player of the Week for the first week of the season.

Next Up For Austin Peay State University Tennis

The Austin Peay State University men’s tennis team will welcome the Redbirds of Illinois State to the Governors Tennis Center for a 2:00pm, January 31st, match.