Clarksville, TN – A battle between Ohio Valley Conference titans is on tap when the Austin Peay State University (APSU) men’s basketball team hosts Belmont, 4:00pm, Saturday, in one of the marquee events on the league schedule with massive implications in the race for regular-season supremacy. 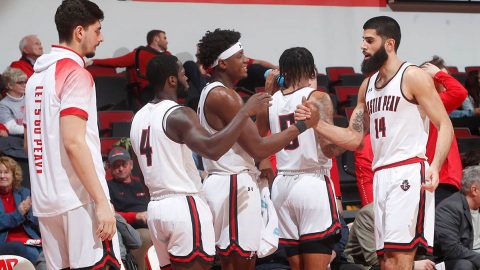 After his season’s seventh 30-point night, with 37 against Tennessee State Thursday night, Terry Taylor [1] is now the nation’s fourth-leading scorer at 23.5 points per game; no APSU Gov has averaged better than 22 points per game for a season since Nick Stapleton (23.1 ppg) in 2001-02, which was the last season a Gov finished top-10 in Division I in scoring; Stapleton finished seventh nationally.

Wendy’s will be providing free chili for fans while supplies last during the game. Austin Peay State University athletics will be honoring its 2020 Athletics Hall of Fame during the contest.

Rick Byrd isn’t around anymore, but Belmont is still Belmont. Longtime Byrd protege Casey Alexander returned to his alma mater over the summer after leading rival Lipscomb to an appearance in the NIT Championship game last season, and the Bruins have hardly missed a beat, save a puzzling loss to SIU Edwardsville on the opening night of league play. The Bruins have toppled some major players as well, taking down Boston College and Western Kentucky during non-conference play.

Nick Muszynski is name most familiar to fans who haven’t followed Belmont much to this point; he’s the guy pundits who didn’t choose Austin Peay’s Terry Taylor [1] invariably picked for preseason OVC Player of the Year honors and the 6-11 sophomore has been as good as advertised, averaging 16.0 points and 6.9 rebounds per night.

Muszynski’s efforts have been buffeted by a trio of wing/guards who can affect the game from practically any spot on the floor. Point guard Grayson Murphy fills the stat sheet, with 9.0 points, 6.3 assists and an 8.2 rebound mark that leads all Division I point guards. Tyler Scanlon, a grad transfer from Boston, has stepped right in and hit better than 42 percent of his three-point attempts while Adam Kunkel, a little-used reserve who averaged less than 10 minutes per night last year, is lighting up opposing defenses to a team-leading 17.2 points per game.

Belmont has the firepower to compete with the Govs; controlling the glass on misses, which both Murray State and SIUE did in their wins against Belmont, each pulling down at least 10 more boards than the Bruins, will be vital for success.

For the second year in a row, Austin Peay State University’s OVC Tournament stay came to an end at the hands of Belmont, which dispatched the Govs 83-67 at Evansville’s Ford Center, March 8th, 2019.

Dylan Windler, months before he would become a first-round NBA draft pick, keyed a 23-11 stretch early in the second half by scoring 10 points and hauling in eight rebounds in just over eight minutes of play to turn a two-point Austin Peay lead into a 10-point deficit.

Three seniors–Zach Glotta [3], Steve Harris [4] and Chris Porter-Bunton [5]–were the only Govs to reach double figures in their final appearance for Austin Peay.

A win would be Austin Peay State University’s first against Belmont under head coach Matt Figger [6].

When Jordyn Adams [7] went for 37 points against Tennessee State, he did more than set a career-high and threaten to become the first freshman to break 40 points since Fly Williams. He also tied Georgia’s Anthony Edwards for the Division I single-game high for a freshman in 2019-20.

A win would make the Govs 8-0 in league play for the first time since the historic 2003-04 season that saw them go unbeaten in league play during the regular-season.

Since the Georgia contest, Austin Peay State University’s first with Carlos Paez [8] and Antwuan Butler [9] manning backcourt duties as dual-threat ball-handlers and distributors, APSU’s ball-possession has taken off, coinciding with a 7-1 record. The duo is posting a 3.6-to-1 assist-to-turnover ratio when in the starting lineup together, committing a paltry 2.4 turnovers per game in a combined 55 minutes per game.

Paez has a 4.3-to-1 assist-to-turnover ratio since joining the starting lineup 10 games ago.

This contest will be Austin Peay State University’s first against a team in the CollegeInsider.com Mid-Major Top-25 poll this season; Belmont currently sits 15th, although that was before the Bruins lost to Murray State, Thursday. APSU received votes in this week’s poll for the first time in 2019-20.

With a victory, Austin Peay State University would be on its first eight-game win streak since the 2006-07 season.

Check back at LetsGoPeay.com and on Austin Peay State University’s Official Athletics Facebook page often for up-to-date news about all APSU Governor athletics, as well as the Governor men’s basketball Twitter page (@AustinPeayMBB). Live stats will be available during the game at PeayStats.com, and all home games and Ohio Valley Conference games can be viewed on the ESPN+ app.