Lawrence, KS – The Tennessee Vols men’s basketball team hits the road for its nonconference finale against the third-ranked Kansas Jayhawks, inside Allen Fieldhouse on Saturday afternoon. Tipoff is slated for 3:00pm CT on ESPN.

Saturday’s game is a part of the Big12/SEC Challenge and is available on ESPN, online through WatchESPN, which can be accessed at espn.com/watch and on any mobile device through the ESPN App. Dan Shulman, Jay Bilas and Holly Rowe will have the call. 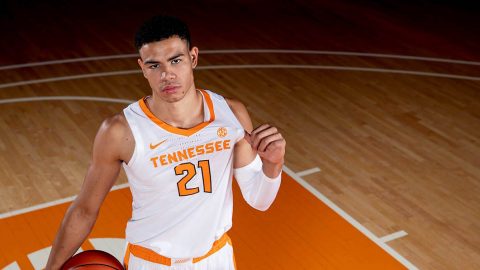 Tennessee Men’s Basketball travels to Kansas to take on the Jawhawks at the Allen Fieldhouse, Saturday afternoon. (UT Athletics)

Last time out the Vols took care of business at home against Ole Miss, giving head coach Rick Barnes [2] his 100th victory as Tennessee’s head coach. UT controlled the contest from the outset, dominating the Rebels in the paint (outscoring them 30-20) and taking advantage of turnovers, holding a 15-4 advantage in points off turnovers.

Junior John Fulkerson [3] led the way for UT, scoring a career-high 18 points and hauled in a career-high-tying 10 rebounds for his third career double-double. Freshman Olivier Nkamhoua [4] was also big off the bench, finishing the night with 10 points and four big rebounds.

This will be the fifth all-time meeting between the Vols and the Jayhawks and the second time UT has traveled to Allen Fieldhouse.

Up next, Tennessee returns home to take on Texas A&M inside Thompson-Boling Arena on Tuesday night. The opening tap is set for 5:30pm CT and the contest can be seen on SEC Network.

That first-ever meeting took place at Allen Fieldhouse, with KU claiming a 92-85 victory. The Vols avenged that loss the following season by upsetting the top-ranked Jayhawks in Knoxville on January 10th, 2010.

The four previous meetings have been decided by an average of nine points.

Tennessee’s all-time record against current members of the Big 12 stands at 14-17.

Give the Vols a 5-3 record against teams ranked in the AP top five during the Barnes era.

Be Rick Barnes [2]‘ eighth head-to-head victory against Bill Self. His seven wins vs. Self currently tie for the most among active coaches (with Tom Izzo of Michigan State).

The 2020 Big 12/SEC Challenge marks the event’s seventh year. Tennessee is 4-1 in the event, as the Vols did not take part in the inaugural challenge.

This is Tennessee’s sixth time playing with the ESPN College Gameday crew on site. The Vols are 3-2 in those matchups. The six appearances tie for 11th-most among Division I programs.

Tennessee is 4-3 during the Barnes era against opponents ranked in the AP top five. The Vols went 3-2 against AP top-five foes last season.

Junior forward Yves Pons [6] has blocked at least one shot in every game this season. He leads the SEC and ranks 19th nationally with 2.7 bpg. His 3.3 bpg during SEC play also leads the league.

About the Kansas Jayhawks

Kansas is coming off its third consecutive victory in Big 12 action. An 81-60 win over Kansas State on Tuesday night improved the Jayhawks to 15-3 overall and 5-1 in Big 12 play.

The Jayhawks’ lone conference loss came at home to then-fourth-ranked Baylor, 67-55. Since that loss, the Bears have ascended into the nation’s top spot in the AP poll, while Kansas landed at No. 3 in both the AP and coaches polls this week.

A year after surrendering the Big 12 regular-season championship for the first time in 14 seasons, the Jayhawks look to climb back to the top of the Big 12 standings and into the conversation for a national championship run.

2019 All-Big 12 third team member Devon Dotson has been explosive for KU. The combo guard initially put his name into the 2019 NBA Draft and participated at the combine this past summer before returning for his sophomore season. Thus far, he is the Jayhawks’ leading scorer (18.2 ppg), is second in assists (4.2 apg) and leads the team in steals with 2.3 per game.

Senior forward Udoka Azubuike has been productive for Kansas after having his 2018-19 campaign ended prematurely due to an injury. He currently ranks second on the team in scoring (12.9 ppg) and first in rebounding (9.5 rpg) and blocks (2.4 bpg). Azubuike leads the country in field-goal percentage, knocking down 77.7 percent of his attempts from the field.

KU’s mascot, the Jayhawk, is derived from the word Jayhawker. Jayhawker was originally a term used for U.S. Civil War guerrilla fighters from Kansas who clashed with pro-slavery groups from the state of Missouri.

In a battle of top-five teams, No. 5 Tennessee dropped a heartbreaker to second-ranked Kansas in overtime, 87-81, in the NIT Season Tip-Off championship game at the Barclays Center on Nov. 23, 2018.

The Big Orange fought the whole game, but an 18-12 advantage in overtime pushed the Jayhawks to the win. Admiral Schofield [10], who scored nine in overtime, finished with a team-high 21 points and six rebounds.

Grant Williams [11], who fouled out with 1:24 left in regulation, added 18 points, eight rebounds, a career-high-tying six assists and two steals. Kansas’ Dedric Lawson won Most Outstanding Player of the tournament after leading the Jayhawks with 24 points, 13 rebounds and five assists in the championship.

Tennessee point guard Jordan Bone [12] chipped in 16 points on 6-of-10 shooting along with six rebounds and five assists. Lamonte Turner [13] and Kyle Alexander [14] added 10 points each.
Williams and Bone both were named to the All-Tournament Team.

With the game tied at 69-69 with 1:24 left, both teams’ defense stepped up and held the other without a basket, forcing overtime. Kansas had two looks at the basket during the final 30 seconds but missed both attempts, including one as time expired.

KU opened overtime on a 5-0 run. An offensive rebound by Schofield got the Vols on the board to end the run, but it wasn’t enough to halt Kansas’ offense. The Jayhawks hit four of their final six shots to put the game away.

Rick Barnes [2] (704) and Bill Self (695) are the seventh- and eighth-winningest active Division I coaches, respectively, in terms of total victories.

Barnes owns seven head-to-head wins over Self—six while Self was at Kansas, once at Illinois. No other head coach (active or former) has defeated Self more than that. Michigan State’s Tom Izzo also has beaten Self seven times.

The Vols under head coach Rick Barnes [2] are 4-3 against AP top-five opponents. He led UT to a 3-2 record in such games last season.

During his career as a Division I head coach, Barnes owns a 21-44 record against AP top-five foes. Of his 27 previous games against Kansas, the Jayhawks were ranked in the AP top five for 11 of them (Barnes won two).

In addition to a home-and-home contract in 2009 and 2010—which saw each team win on its own home court—the Vols and Jayhawks have been on a similar holiday tournament rotation the past decade.