The Lady Vols are currently tied for second place in the league standings with Mississippi State at 5-2. South Carolina is in the catbird’s seat with a 6-0 league mark.

LSU, meanwhile, is tied for third along with Kentucky and Texas A&M at 4-2. 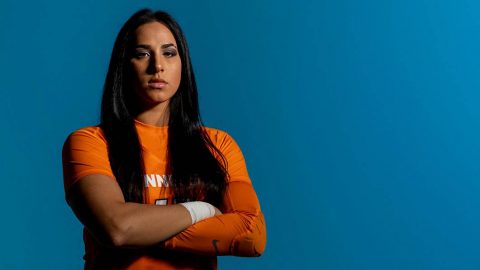 Details About “We Back Pat” Week

Fans are encouraged to wear a “We Back Pat” shirt to the Tennessee-LSU game.

Orange and purple shakers, courtesy of the Pat Summitt Foundation, will be available for fans while supplies last.

Sunday’s game will be televised by the SEC Network with Courtney Lyle (PxP) and Carolyn Peck (Analyst) handling the call.

Want to be the Jr.Vol of the Game? Sign up for the Jr.Vol Club today and get the chance to see yourself on the video board. Members also receive free Jr.Vol swag, tickets to games for all sports and exclusive Jr.Vol events.

There will be postgame lay-ups on Sunday. Kids 12 and younger can shoot a lay-up on the court after the game.

Come High-Five the Lady Vols. Kids 12 & younger can pick up a wristband at the Fan HQ table on the concourse to participate in the pregame High-Five Tunnel. Wristbands are limited. To purchase discounted group tickets and reserve wristbands for your team, call 865.946.7000.

Upcoming: Join the Lady Vols for the fourth annual StrongHer TogetHer event! The $15.00 package includes one ticket to the Lady Vol vs. Mississippi State game on February 6th, a StrongHer TogetHer t-shirt, a $5.00 concession voucher for the game, a definite dozen puzzle and access to a pre-game event at the Women’s Basketball Hall of Fame, which includes an autograph session with different female student-athletes.

You can be a part of the Lady Vols’ electric introductions. Make sure to download our light show app courtesy of Coca Cola. The “Hoops Hype” app is available free of charge from the Apple Store or the Google Play Store.

Recent Schedule Has Been Unkind

Sunday’s contest will be Tennessee’s third game in seven days, and the Lady Vols have navigated it while the opposition had extra rest and preparation time in each case.

Tennessee plays LSU, which has been idle since last Sunday’s win vs. Kentucky, 65-59. The Lady Vols, meanwhile, played at No. 3/5 UConn on Thursday night, losing 60-45.

The Lady Vols played UConn after hosting Alabama on Monday night in a game that went down to the wire (UT, 65-63). UConn, meanwhile, had played on Sunday and had an extra day of prep for Tennessee.

To start the week off, Tennessee played Alabama on Monday after beating Florida in Gainesville on Thursday, while Alabama came into Knoxville with the same advantage as LSU, a seven-day period before locking horns with the Lady Vols.

The upcoming itinerary after Sunday isn’t for the faint of heart, with UT traveling to Vanderbilt and No. 1/2 South Carolina, a visit from No. 9/9 Mississippi State, a trip to LSU (receiving votes), a home game vs. No. 15 Texas A&M and a trek to No. 21/20 Arkansas.

UT has won four straight SEC games and is 3-0 in home league contests.

LSU is 3-2 over its last five but has earned wins in six of its last eight battles.

In three of its past four games, the Tigers have defeated ranked foes in No. 10 Texas A&M and No. 11 Kentucky and lost by only four to No. 10 Mississippi State.

No. 23 UT makes it three straight ranked foes for LSU.

Tennessee embarks on a two-game road swing, playing at Vanderbilt on Thursday (8:00pm CT/SEC Network) and at No. 1/2 South Carolina on Sunday (12:00pm CT/ESPN2).


Notes From The Last Game

Coming into the contest the Huskies were shooting .478 from the floor and .387 from behind the arc. Tennessee limited them to .315 percent overall shooting and .222 from 3-point range. UConn was also averaging 78.5 points per contest on the season, with the 60 points against UT standing as the third-fewest they’ve scored this season.

Rennia Davis’ [3] 16 points against UConn was the 18th double-digit performance of the season and the 64th of her career. She is currently fourth in the SEC in scoring, averaging 17.3 ppg.

Jazmine Massengill [4] put up 11 points against UConn while dishing out a game-high five assists and snagging a season-high-tying three steals. It’s the seventh game this season in which she’s tallied five or more assists and the fourth time she’s led the team in steals.

Eight opponents have failed to shoot 30 percent vs. Tennessee, including Ole Miss, which shot 18.5 percent on Jan. 9. That was the lowest percentage since January 8th, 2012, when Arkansas shot 18.2 percent.

UT held No. 3/5 UConn to only 60 points on its home court on January 23rd. The Huskies had entered the contest ranked No. 16 nationally with a 78.5 ppg. average.

Tennessee has won 13 of the last 17 games, including both of last season’s meetings.

The Lady Vols are 1-1 vs. LSU in overtime games. The last time the two teams went to OT was on March 1st, 1997. Tennessee won the game 100-99 to advance to the semifinals of the SEC Tournament.

The last time these programs met in the SEC Tournament was last season on March 7th, as the Lady Vols captured a 69-66 squeaker over LSU to clinch an NCAA Tournament bid.

At least one team has been ranked in this series in 63 of 65 games. Last year was the only season where neither program was ranked at the time they played.

About The LSU Tigers

The Tigers returned nine letterwinners, including four starters, from last season’s team that finished 16-13 overall and 7-9 in SEC play (t8th).

LSU was picked to finish eighth by the media and sixth by the coaches in the SEC preseason polls.

LSU had 20 turnovers, but shot 47.5 percent from the field and limited Kentucky to 23.3 percent shooting.

Sophomore Rennia Davis [3] scored 19 points to help rally eighth-seeded Tennessee to a 69-66 win over ninth-seeded LSU in the second round of the SEC Tournament on March 7th, 2019.

LSU was led by Khayla Pointer, who had 21 points. Faustine Aifuwa and Ayana Mitchell had 16 each.

Sophomore Rennia Davis [3] tied her season high of 24 points to power the Lady Vols past LSU, 74-65, on January 27th, 2019, at Thompson-Boling Arena for their annual “Live Pink, Bleed Orange” game.

The Tigers (12-7, 3-4 SEC) had three players with double-digit points, with guard Khayla Pointer leading the pack with 17 points and five assists. LSU junior forward Ayana Mitchell logged a double-double of 12 points and 10 rebounds.