Clarksville, TN – It’s been almost a generation since the Austin Peay State University (APSU) women’s indoor track and field team has won the Ohio Valley Conference title, but so far under first-year head coach Valerie Brown the Governors may be making a case for being considered as one of the favorites to win this year’s championship. 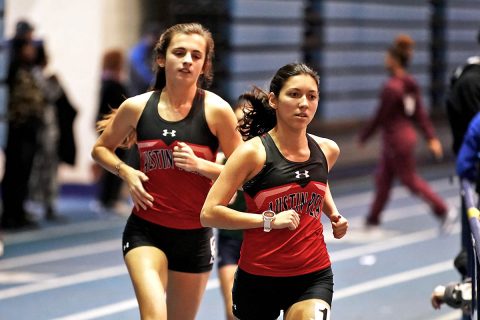 The latest bit of proof come this past weekend as they won the Marshall University Thundering Herd Invitational, it’s first in-season event championship since the 2015 season.

And not only did they win it, but pardon the pun, they ran away with the title by winning by 37 points over runner-up and invitational host Marshall.

And as each meet goes by the Govs continue to show they are a deep squad that can score points in just about every event, be it sprints, middle distances, field events, relays as well as posting some of the best times, distances and heights.

In fact, heading into this past week’s action Austin Peay State University had posted conference bests in the 200 meters, 60-meter hurdles, the 4×400 relay team and triple jump. Add to that, they have also recorded the second-best marks in the 60-meter dash, 400 meters, the distance medley relay, the pole vault and the long jump.

Overall, the APSU Governors have posted 27 Top 10 marks among 13 different events on the OVC’s performance lists.

And just to add the icing on the cake, of the 27 Top 10’s by Austin Peay State University athletes this indoor season only two are by a senior, Tymeitha Tolbert in the 60 meters and 200 meters distances.

Other coaches in the OVC have also taken notice, with four different Governors haven taken home either Track or Field Athlete of the Week honors in the conference, including Kenisha Phillips and Sabrina Richman, as track athletes of the week and Maya Perry-Grimes and Karlijn Schouten as field athletes of the week.

And there is no question there will be more to come before the regular season comes to an end and before the OVC Championship on February 26th-27th at the Birmingham CrossPlex in Birmingham, AL, where the APSU Govs will be looking to knock off the two-time defending OVC indoor champion Tennessee Tech.