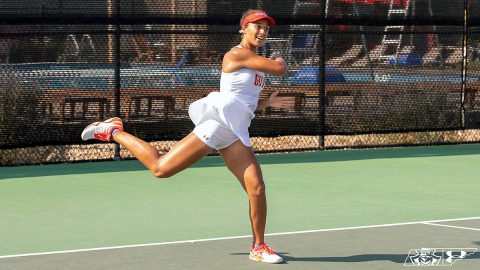 The Governors got things started with a strong effort in doubles play, winning the first two matches to claim the doubles point.

The Govs No. 1 duo, of Danielle Morris [1] and Jana Leder [2] dispatched the Hilltoppers No.1 pairing in impressive fashion to give Austin Peay State University an early advantage.

Playing as the No.3 doubles pairing for the Govs, Ana Albertson [3] and Sarah Heckel [4] improved to 2-0 on the season as a tandem, and clinched the doubles point for Austin Peay State University.

The APSU Govs No.2 pairing of Fabienne Schmidt [5] and Aleks Topalovic [6] led their match 5-4, but it was left unfinished after the Governors clinched the doubles point.

Then it was the Govs No. 1 singles player who clinched the match, as Schmidt knocked off the Hilltoppers No. 1 to pick up match clinching point. Just for good measure, Martina Paladini-Jennings [7] picked up a fifth point for the Governors while playing as the No. 4 in singles action.

Western Kentucky was able to salvage a few points in singles play, as the Hilltopper’s No. 5 and No. 6 knocked off Topalovic and Heckel, picking up two points for the match. But it was too little, too late, as the Governors picked up a 5-2 victory.

For Austin Peay State University, Schmidt and Leder each improved to 4-0 this spring in singles play. Dating back to the fall season, Schmidt is on a six match winning streak in singles action. Paladini-Jennings also picked up third straight singles win, improving to 3-1 this spring.

The Austin Peay State University women’s tennis team will hit the road next weekend for a pair of matches in Dayton, Ohio. First the APSU Govs will take on the Flyers of Dayton in a 7:00pm, Friday match. Then a 2:30pm, Saturday match against Wright State will conclude a brief two-match road trip.