APSU Basketball travels to Nashville to take on Tennessee State

Clarksville, TN – The Austin Peay State University (APSU) men’s basketball team is set for the return trip to the Nashville pairing of the Ohio Valley Conference, beginning with a 7:30pm, Thursday rematch with Tennessee State at the Gentry Center. 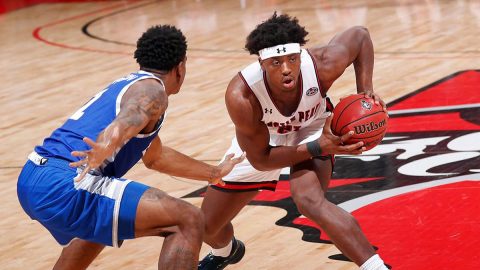 The Govs and Tigers will square off on ESPN3 as part of a day-night doubleheader; the women’s contest begins at 11:00am as part of Education Day.

Journeying to the Gentry Center has been tough this season, as only Eastern Kentucky on January 18th has taken a win from the Tigers at home.

The Govs have just five wins in 15 attempts against the Tigers on the road since the turn of the century.

The strength of Tennessee State’s depth was not displayed in the previous meeting this season, when the Tigers were down to just eight active players. Wesley Harris was missed even more than anticipated during the four-game stretch he missed, including the contest against the Govs–he returned just last weekend and averaged 12.0 points and 10.5 rebounds in wins against Tennessee Tech and Jacksonville State.

The short lineup did kick off a renaissance for Emmanuel Ogbuta, who is averaging 12.0 points and 4.8 rebounds on 64.5 percent since the Govs and Tigers tipped it up on Jan. 23.

What was true before the last meeting is still true today–Tennessee State commits a bunch of turnovers (386 overall, 16.8 per game, both among the nation’s bottom-15) and commits a bunch of fouls (485 total, 21.1 per game, both among the nation’s bottom-15). While a fully-operational Tiger unit can overcome the foul issues, Austin Peay State University will look to force more turnovers than the 10 TSU committed in the previous contest, second-fewest by the turnover-prone Tigers in 2019-20.

Keep an eye out for Michael Littlejohn in this one; the sharpshooter who hits 43.0 percent from deep and makes nearly three three-pointers per game was held to just three points in the previous meeting between the Govs and Tigers.

A Tennessee State squad ravaged by illness is not the greatest indiciator of what the 2019-20 Tigers have been. Missing not only Wesley Harris but a host of key reserves who had the active lineup down to eight players, the Tigers were no match for the Govs in a 99-74 Austin Peay State University victory back on January 23rd.

Terry Taylor [1] and Jordyn Adams [2] had matching 37-point efforts, with Taylor setting a Dunn Center record for threes without a miss (six) and the Govs committed just four turnovers, their fewest in a single game since 2009.

The Govs have risen to 17th in the most recent CollegeInsiders.com Mid-Major Top-25.

A win would give Austin Peay State University a five-game road win streak, its longest since an eight-gamer during the 2003-04 campaign.

With Carlos Paez [4] and Antwuan Butler [5] are in the starting lineup together, the Govs are 10-1, with the duo averaging 2.3 turnovers in 56 combined minutes, at 3.48-to-1 assist-to-turnover ratio.

In OVC play, the Govs are now plus-3.1 in turnover margin and plus-5.0 in rebounding margin.

Austin Peay State University sank 14 three-pointers at a 50.0 percent (14-for-28) clip in the January 23rd contest against Tennessee State, both season-highs.

Austin Peay State University Governors Courtside Seating is winding down for the 2019-20 season. Fans can contact the APSU Athletics Ticket Office for courtside seating availability and pricing. The VIPeay Hoops Experience, available to Black Tie Monocle Society members and above, also returns for 2019-20 after a successful debut last season.

For more information on joining the Governors in the Dunn Center this winter or to become involved with the Monocle Society, call 931.221.PEAY. You can also purchase tickets online at www.LetsGoPeay.com/buytickets; [7] be sure to access the new 360-degree view of the Dunn Center when purchasing tickets.

Check back at LetsGoPeay.com and on Austin Peay State University’s Official Athletics Facebook page often for up-to-date news about all APSU Governor athletics, as well as the Governor men’s basketball Twitter page (@AustinPeayMBB). Live stats will be available during the game at PeayStats.com, and all home games and Ohio Valley Conference games can be viewed on the ESPN+ app, although fans will need ESPN3 access for the TSU contest.