Clarksville, TN – After just one match back in Clarksville, the Austin Peay State University (APSU) women’s tennis will put its three-match winning streak to the test when they travel to the Buckeye State for a 7:00pm, Friday match against Dayton and a 2:30pm, Saturday match against Wright State. 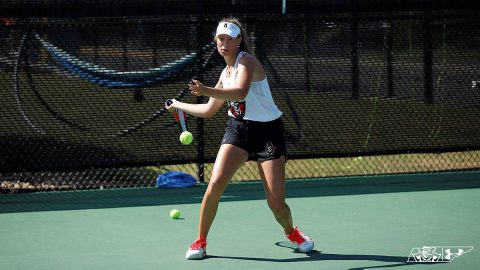 Coming off the best season in program history, Austin Peay State University is off to another hot start to the season.

After dropping the first match of the spring, the Govs have got right back on track, reeling off three-straight victories. Fabienne Schmidt [1] was named the OVC Women’s Tennis Player of the Week for the first week the honor was given this season.

It was the first career OVC weekly honor for the APSU Govs junior from Hillscheid, Germany.

This spring the Governors have been led by the the quartet of Schmidt, Danielle Morris [2], Jana Leder [3], and Martina Paladini-Jennings [4], who have played to a 14-2 record in the top-four singles positions. Playing as the No. 1 and No. 3, Schmidt and Leder have both posted 4-0 records this spring, while Schmidt has won six-straight singles matches dating back to the fall.

Morris and Paladini-Jennings have been in the No. 2 and No. 3 singles positions this spring, with each posting a 3-1 record to start their sophomore campaign.

In doubles play, the duo of senior Ana Albertson [5] and freshman Sarah Heckel [6] have gone 2-0 while playing in the No. 3 doubles position for Austin Peay State University. The No. 2 pairing of Schmidt and Aleks Topalovic [7] have bounced back from a loss in the season opener, winning their next three matches to improve to 3-1 as a duo.

Morris and Leder have been the Governors No. 1 doubles team this spring, going 2-2 during the first four matches of the season

It has been a slow start to the season for the Dayton Flyers, having dropped their first five matches of the season. Last time out, Dayton hosted Cincinnati for a match that saw the Flyers fall, 5-2. Sophomore Claire Ghidotti has posted the best record this spring for the Flyers, going 3-2 in singles and earning Atlantic 10 Rookie of the Week honors for going 2-0 from the No. 6 spot during the first week of the season.

Having only played twice this spring, Wright State has dropped a pair of matches to Marshall, 5-2, and Butler, 4-3. Wright State junior Luisa Pelayo has led the way for the Raiders, and picked up Horizon League Women’s Singles Player of the Week honors on January 28th. Pelayo has gone 2-0 as the Raider’s No. 2 singles player this season, she also picked a pair of doubles wins, playing as both the No. 1 and No. 2 pairing.

Next Up For Austin Peay State University Women’s Tennis

After the weekend jaunt to Ohio, the Governors will return home for a pair of matches. First, the Austin Peay State Unviersity women’s tennis team will welcome Cumberland for a 12:00pm, February 11th, match; before Carson Newman comes to Clarksville for an 11:00am, February 14th, match in the Governors Tennis Center.