Clarksville, TN – The Austin Peay State University (APSU) men’s basketball team will square off against Belmont in a battle of Ohio Valley Conference titans in a 5:00pm, Saturday contest at Curb Event Center with far-reaching implications at the top of the league standings. 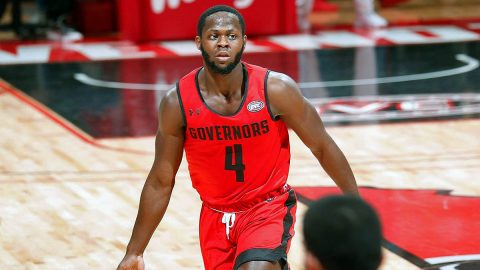 For the first time this season, Austin Peay State University fell to an OVC foe Thursday night at Tennessee State, while Belmont scored one of the bigger victories in league play to date when the Bruins took down Murray State in Nashville.

The Govs handled the Bruins in the January 25th outing, but with both Murray State and Austin Peay State University suffering their season’s first league losses Thursday night, Saturday could have far-ranging impact on the top half of the league; Murray State’s matchup with Tennessee State means four of the league’s top five will face off against one another.

Rick Byrd isn’t around anymore, but Belmont is still Belmont. Longtime Byrd protege Casey Alexander returned to his alma mater over the summer after leading rival Lipscomb to an appearance in the NIT Championship game last season, and the Bruins have hardly missed a beat, save a puzzling loss to SIU Edwardsville on the opening night of league play. The Bruins have toppled some major players as well, taking down Boston College and Western Kentucky during non-conference play.

Nick Muszynski is name most familiar to fans who haven’t followed Belmont much to this point; he’s the guy pundits who didn’t choose APSU’s Terry Taylor [1] invariably picked for preseason OVC Player of the Year honors and the 6-11 sophomore has been as good as advertised, averaging 15.5 points and 6.5 rebounds per night.

Muszynski’s efforts have been buffeted by a trio of wing/guards who can affect the game from practically any spot on the floor. Point guard Grayson Murphy fills the stat sheet, with 9.1 points, 6.3 assists and an 7.8 rebound mark that leads all Division I point guards. Tyler Scanlon, a grad transfer from Boston, has stepped right in and is flriting with a 50-40-90 season (field goal percentage-three point field goal percentage-free throw percentage).

Adam Kunkel, a little-used reserve who averaged less than 10 minutes per night last year, is lighting up opposing defenses to a team-leading 16.8 points per game. In the last meeting, Austin Peay State University outrebounded Belmont by 11, surrendering just six second-chance opportunities to mitigate any opportunities for the Bruins to wear down the Governor defense.

Austin Peay State University scored its signature victory of the season to date in an 86-78 win against the Bruins in the Dunn Center, the Governors first win against the Bruins in Clarksville since 2007. Eli Abaev [2] had 14 of the first 18 points for the Govs as Terry Taylor [1] faced constant double-teams; Taylor still finished with 17 rebounds and 13 points in another monster performance.

The Governor defense locked down late, holding Belmont without a field goal from 5:49 to 1:49 in the second half and building a double-digit lead to cruise to victory.

A win would be Austin Peay State University’s first road win against Belmont since November 17th, 2008.

Over the last six games, the APSU Govs have bettered opponents 96-64 in points off turnover.

In 11 league games, the Govs are averaging plus-4.6 in rebounding margin and plus-3.8 in turnover margin.

Jordyn Adams [4] dished out a career-high six assists in addition to his game-high 24 points points in the previous meeting with Belmont.

Carlos Paez [5] has a 3.58-to-1 assist-to-turnover ratio since joining the starting lineup 13 games ago.

Abaev kicked off a recent hot streak that’s seen him average 12.0 points and 8.0 rebounds over the last four games during the previous Belmont game.

Two of the nation’s best when it comes to ball control will be in the building running point on Saturday. Belmont’s Grayson Murphy is No. 2 in Division I in assist-to-turnover ratio (3.90), while Austin Peay State University’s Carlos Paez [5] (3.32) is sixth. Murphy dished out 10 assists—most by an APSU opponent this season—during the January 25th contest at the Dunn Center.

Governors Courtside Seating is winding down for the 2019-20 season. Fans can contact the APSU Athletics Ticket Office for courtside seating availability and pricing. The VIPeay Hoops Experience, available to Black Tie Monocle Society members and above, also returns for 2019-20 after a successful debut last season.

For more information on joining the Governors in the Dunn Center this winter or to become involved with the Monocle Society, call 931.221.PEAY. You can also purchase tickets online at www.LetsGoPeay.com/buytickets; [6] be sure to access the new 360-degree view of the Dunn Center when purchasing tickets.