Clarksville, TN – Two weeks ago the Austin Peay State University (APSU) women’s basketball team dropped a heartbreaker to Belmont in the Dunn Center, Saturday the Governors will make the short trip down I-24 to Nashville for a 3:00pm contest where they will look to return the favor to the Bruins at the Curb Event Center. 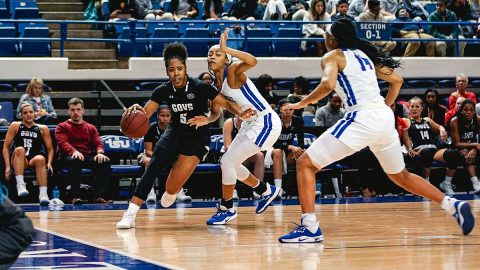 Belmont is 9-0 this season in games played at the Curb Event Center, and the Govs will look to hand the Bruins their first loss in the Music City this season

Saturday will be another Ohio Valley Conference doubleheader at the Curb Event Center, as the women’s contest is set for 3:00pm, with the Austin Peay State University and Belmont men’s game to follow at 5:00pm.

Coming off a season that saw Belmont win their third-straight Ohio Valley Conference regular season title and their fourth-straight OVC Tournament title, the Bruins were picked to repeat as champions in both preseason polls. Belmont’s Ellie Harmeyer was the consensus OVC Preseason Player of the Year, while Harmeyer, Maura Muensterman, and Maddie Wright were all named to the Preseason All-OVC Team.

Averaging 17.9 points and 11.8 rebounds per game, Harmeyer is the only player in the OVC that is averaging a double-double this season. Harmeyer ranks 41st in the country in scoring and third in rebounding, she also ranks second in the nation with 16 double-doubles this season. Harmeyer does much of her damage at the free-throw line, she ranks fourth in the nation in free throws made (126) and sixth in free throws attempted (156) – both of which lead the OVC.

Belmont has the top scoring defense in the OVC, allowing just 57.8 points per game this season. Despite having the just the 9th best scoring offense in the OVC, the Bruins stellar defense has allowed them to have a plus 2.4 scoring margin this season. The Bruins lead the conference and rank 17th nationally in field-goal percentage defense (34.3%), they also rank 15th nationally and lead the league in three-point percentage defense (26.5%).

This is the 19th meeting in a series that dates back to 1982; the Govs trail in the all-time series 6-11, and have dropped the last five matchups.

Less than two weeks ago, Austin Peay State University welcomed Belmont to the Dunn Center for a January 25th, matchup, which saw the Governors fall in heartbreaking fashion on the Bruins last possession of the game.

With 17 seconds left to play in the game, a Brianah Ferby [2] jumper gave the Governors a one-point lead over Belmont. But with 1.7 seconds on the clock, the Bruin’s Harmeyer hit a contested layup to take the lead back for Belmont. On the final possession of the day, the Governors were unable to get a shot off and fell 53-52.

The Austin Peay State University offense was led by Ella Sawyer [3], as the freshman from Adelaide, South Australia poured in 15 points. Sawyer knocked down a career-high three three-pointers, and shot 46.2 percent from the floor in the contest.

Brandi Ferby [4] added another 13 points, as she was the only the only Gov that managed to get to the free throw line in the contest. Ferby went six-of-seven from the charity stripe, dished out a team-high two assists, and buried a three-pointer.

Maggie Knowles [5] was the final APSU Governor in double-figures against the Bruins, as the sophomore from Murfreesboro Tennessee scored 12 points exclusively from behind the three-point arc.

Harmeyer led the way for the Bruins, pouring in a game-high 22 points and grabbing 17 rebounds. Harmeyer also went 10-of-10 from the free-throw line in the contest.

What to Watch For

The APSU Govs defense is averaging 21.1 turnovers forced per game, which ranks 19th in the country and leads the Ohio Valley Conference.

The Governors lead the OVC with a plus 4.27 turnover margin and are the only team in the conference that has forced more than 420 turnovers this season.

Against TSU, all 12 Govs that took the court scored and recorded a rebound for the first time this season.

The APSU Govs 87 points against TSU were the most they have scored in OVC play this season, they are 6-0 this season when they score upwards of 80 points.

Austin Peay State University shot 45.3 percent from the floor against TSU, the Govs are 6-0 this season when they shoot better than 45 percent.

The Governors outrebounded TSU 51-30, plus-21 is their biggest rebounding advantage of the season.

D’Shara Booker [7] led the Govs with a career-high 15 points and nine rebounds last time out against TSU.

The Governors bench scored a season-high 50 points against TSU.

The Govs scored a season-high 48 points in the paint against TSU, improving to 5-1 when they outscore the opponent in the paint.

The APSU Governors are looking to snap a five-game losing streak to the Belmont, and pick up their first win at the Curb Event Center since 2011.

Austin Peay State University’s 18 made three-pointer performance against Kentucky Wesleyan, November 5th, in the season opener is tied for the third best team single-game total in the NCAA this season.

For more information on joining the Governors in the Dunn Center this winter, to secure season tickets or to become involved with the Monocle Society, call 931.221.PEAY. You can also purchase tickets online at www.LetsGoPeay.com/buytickets; [8] be sure to access the new 360-degree view of the Dunn Center when purchasing tickets.