Clarksville, TN – After a pair of matches on the road, Austin Peay State University (APSU) women’s tennis will put its five-match winning streak to the test twice this week with a pair of matches at the Governors Tennis Center. The APSU Govs will play a noon, Tuesday match against Cumberland, before welcoming Carson Newman for an 11:00am, Friday match. 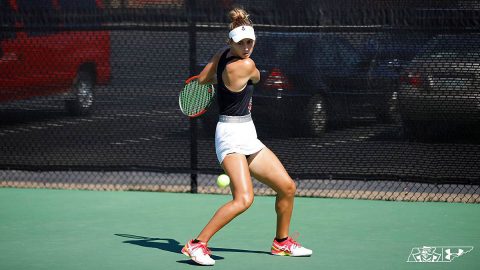 After dropping the first match of the season, Austin Peay State University has reeled off five-straight wins, including three 7-0 sweeps.

Playing as the No. 1 in singles each time out, Fabienne Schmidt [1] has led the Governors, posting a 6-0 start to the season. Dating back to the fall season, Schmidt has won eight-straight singles matches.

Freshman Jana Leder [2] has also posted a 6-0 record to start the spring season. Leder has played as the No. 3 each time out, and has yet to drop a singles match in her Austin Peay State University career. Playing as the No. 2, Danielle Morris [3] is 5-1 to start the spring, after being named the No. 6 player in the 2020 OVC Women’s Tennis Preseason Player Top 10 List.

In her final campaign as a Governor, Ana Albertson [4] is off to a 3-1 start to the spring in singles action. The APSU Govs lone senior, Albertson is on a three-match winning streak and is 7-3 in her last ten matches, dating back to the fall season.

In doubles play, the senior-freshman duo of Albertson and Heckel have led the way, posting a 4-0 record so far this spring while playing in the No. 3 position. Schmidt and Topalovic have been the APSU Govs No. 2 pairing, they have won their last five matches en route to a 5-1 record this spring. Playing as the No. 1 doubles duo, Morris and Leder have played to a 3-3 record.

Off to a 2-1 start to their season, the Phoenix fell to Tennessee Wesleyan, 5-2, in their last match. To start their spring season, Cumberland dropped a pair of exhibition matches to the OVC’s Belmont, 7-0, and Murray State, 6-1.

Carson Newman enters the week the same way as the Govs, having swept Milligan and King last weekend at the Knoxville Racquet Club. The Governors will be the first Division I foe that Carson Newman faces this season, it will also be the first time the Eagles play a road match.

After the pair of matches at the Governors Tennis Center, the Austin Peay State University women’s tennis team will head back out on the road for a 4:00pm, February 21st, match at the Bass-Rudd Tennis Center against Louisville.