Clarksville, TN – The Austin Peay State University (APSU) baseball team opens its 2020 regular season this week at Raymond C. Hand Park still among the favorites to win the Ohio Valley Conference title, but will have to find a away to do it with several new faces on the squad, especially on the mound.

The Govs finished 32-25 last season and made a deep run into the OVC postseason tournament, winning its first two games, but gone from that team are five of its top seven pitches as far as innings pitched goes – including Jacques Pucheu, Josh Rye and Brandon Vial, who combined to pitch over 216 innings last year and win 18 games. 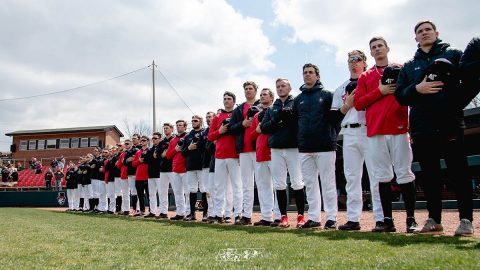 Now the Govs do return seniors Tyler Thompson and Ryan Kouba, who pitched over 40 innings each last season, but after that it drops to just 24 innings pitched by Nolan Monaghan – also a senior – with only two other returning pitchers (sr. Tucker Weaver and soph. Sebastian Martinez) having thrown at least 20 innings last year.

That leads to eight new arms to the team in 2020, including five transfers: Hayden Josephson, Austin Carder, Kyle Nunn and Noah Miller – also juniors – along with sophomore Collin Loose.

This group will also be joined by three freshmen in Matt Magrann, Peyton Jula and Greg Norman, as well as three redshirts that are returning in sophomore Harley Gollert and freshmen Cooper Davidson and Drew McIllwain.

While the pitching core is heavily weighted with new faces, the defense/offense will see several returnees back, led by sophomore outfielder Garrett Spain – who was named the OVC’s Freshman of the Year.

Max Remy, Tyler Hubbard and Griffin Rivers are also returning for the Governors along with four new faces through transfers: TJ Forman, Ty Delancey and Alex Hay – all juniors – and freshman Skyler Luna, a Clarksville native who is transferring in from Tennessee as well as four freshmen: Jacob Curtis, Tyler Cotto, Brock Lomax and Reid Brown.

The big question for head coach Travis Janssen and Govs fans is how soon the transfers and freshmen need to get ready to play at the Division I level, because there will be some level of a learning curve early-on.

But tradition and history say it shouldn’t take long and come mid-May the APSU Govs will be ready once again to challenge for the OVC title.