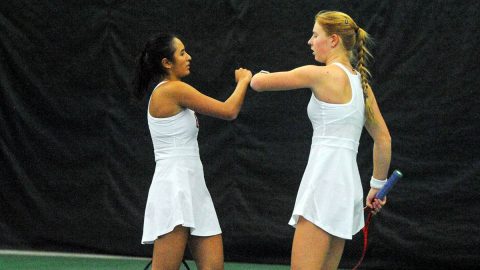 The APSU Governors jumped all over the Phoenixes early, posting a pair of convincing doubles wins to claim the doubles point.

The No.1 doubles pairing of Danielle Morris [1] and Jana Leder [2] finished their match first, beating Cumberland’s No. 1 duo 6-1.

The No. 2 doubles pairing of Fabienne Schmidt [3] and Martina Paladini-Jennings [4] claimed the doubles point for Austin Peay State University, beating Cumberland’s No. 2 pairing in straight sets.

In the third doubles matchup, Ana Albertson [5] and Sarah Heckel [6] improved to 5-0 as a duo this spring, picking up a win over the Phoenixes’ in the No. 3 position.

In singles play, Austin Peay State University took care of Cumberland in convincing fashion. The No. 3 singles match finished first, with Leder winning one of the most lopsided matches of the day. The No.2 matchup was the second on the board, as Morris picked up another point for the Govs, putting them one point away from claiming their sixth-straight win.

The match point was claimed for Austin Peay State University in the No. 1 sinlges matchup, with Schmidt winning the most contested singles match of the day for the Governors to put the match on ice.

In the final three singles match, the Governors continued to execute at a high level, with Paladini-Jennings and Heckel both posting big wins in the No. 4 and No. 5 positions. The Governors lone senior, Albertson ended the day with another lopsided win against Cumberland’s No. 6, to give the Govs their third-consecutive 7-0 victory.

In doubles play, the Govs No. 3 doubles duo of Albertson and Heckel improved to 5-0 during the spring. Morris and Leder picked up their fourth doubles win as a pairing this spring, while Schmidt and Paladini-Jennings picked up their first win as a duo.

The APSU Women’s tennis team will be back in action when they host Carson Newman for an 11:00am, Friday, match at the Governors Tennis Center.