Clarksville, TN – A rivalry game amplified by a battle for the final spot in the Ohio Valley Conference Basketball Championship, the Austin Peay State University (APSU) women’s basketball will host Murray State for a 5:00pm, Thursday tip off in The First Financial Bank Battle of the Border in a game that means more than just bragging rights this season. 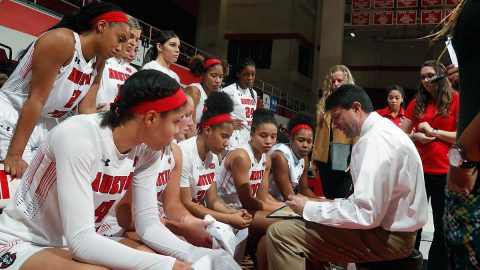 With just six games left remaining on the schedule, Austin Peay State University (13-10, 4-8) and Murray State (11-12, 4-8) are tied for the eighth and final spot in the OVC Basketball Championship at the Ford Center in Evansville, Indiana.

The Governors and Racers will meet twice in the final three weeks of the season to break the deadlock, with the fist matchup coming in the Dunn Center, before a 5:00pm, February 29th meeting at the CFSB Center in Murray, Kentucky, for the regular-season finale.

Thursday’s games will be a Red Out—all fans are encouraged, to quote Director of Athletics Gerald Harrison [1], See Red! The first 250 students in attendance will receive priority seating in the lower level and can pick up a red “I’m A Gov” t-shirt at the marketing table, and pizza courtesy Michael’s Pizza.

Gates open at 4:00pm and after the 250 seats are filled in the lower bowl, students will be redirected to the upper bowl area. Game sponsor First Financial Bank will provide 500 red Battle of the Border shirts while supplies last, and provide those shirts to students after the 250 “I’m A Gov” shirts are gone.

This season, the Racers have been led by sophomore Macey Turley, a Preseason All-OVC selection. Turley is the only player in the OVC that ranks in the top-four in scoring (17.3 ppg) and assists (4.5 apg). Turley’s is one-of-two players in the OVC with 100-plus assists this season, her 103 helpers rank second in the league.

One of the top three-point shooting teams in the OVC, Murray State ranks third in the league in made three-pointers (179) and three-point percentage (31. 8%). The Racers have also attempted 563 triples this season, which is the fourth most in the conference. The Murray State three-point attack is led by a trio of Racers who all rank in the top-12 in the OVC in three-pointers made per game – Turley (2.2), Lex Mayes (1.9), and Macie Gibson (1.6)

The duo of Laci Hawthorne and Alexis Burpo are one-of-two pairs of OVC teammates (Chelsey Perry and Maddie Waldrop, UTM) that both rank in the top-six in the conference in rebounding.  Hawthorne’s 8.5 rebounds per game is good for third best in the league, while Burpo’s 7.9 boards per game ranks sixth.

This is the 90th meeting in a series that dates back to 1977; the Governors trail in the all-time series 44-45, but have won two of the last three meetings. In the history of Austin Peay State University women’s basketball, the Govs have more games played and more wins against Murray State than any other team in program history.

Brianah Ferby [3] led the way for the Governors in double-figures, scoring a game-high 21 points, while knocking down a team-high three three-pointers. Arielle Gonzalez-Varner [4] posted a double-double, grabbing a team-high 11 rebounds and adding 16 points.

Brandi Ferby [5] scored 12 more points for the APSU Govs, doing the majority of her damage from the free-throw line, where she went 10-of-12 in the contest. The duo of Keisha Gregory [6] and Nieja Crawford [7] were the final two Governors in double-figures, with each chipping in 10 points.

Murray State was led by Evelyn Adebayo, who posted 21 points and 12 rebounds. Janika Griffith-Wallace added 17 points for the Racers, while Alexis Burpo knocked down a game-high four three-pointers en route to 15 points.

What to Watch For

The Governors are one-of-eight teams in the country that has attempted 630-plus three-pointers this season, and they are 1-of-18 teams that have made 195 or mode triples.

The APSU Govs defense is averaging 21 turnovers forced per game, which ranks 17th in the country and leads the Ohio Valley Conference.

The Governors lead the OVC with a plus 4.26 turnover margin and are the only team in the conference that has forced more than 440 turnovers this season.

With three more made three-pointers, the 2019-20 Govs will become the third team in program history to make 200 triples in a single season.

Austin Peay State University has attempted 639 three-pointers this season, which is already the second-most in a single season in program history – trailing only the 2018-19 team, which launched 743 triples.

Maggie Knowles [9] is shooting 44.9 percent from three-point range this season, which leads the OVC and ranks 9th in the NCAA. She currently is the Austin Peay State University career three-point percentage leader, shooting 42 percent in her career.

With 39 made triples this season, Shay-Lee Kirby [10] needs to make just five more threes to eclipse Knowles for the third-best three-point shooting season by a Governors freshmen.

Austin Peay State University and Murray State are two of the top three-point shooting teams in the OVC. The Govs lead the conference in threes made per game, while the Racers rank third, averaging 7.8 triples per contest.

With 4-8 records in conference play, Austin Peay State University and Murray State are tied for the eighth and final spot in the OVC Basketball Championship with just six games left to play this season.

Check back at LetsGoPeay.com and on Austin Peay State Unviersity’s Official Athletics Facebook page often for up-to-date news about all Governor athletics, as well as the APSU Governor women’s basketball Twitter page (@AustinPeayWBB). Live stats will be available during the game at PeayStats.com, and all home games and Ohio Valley Conference games can be viewed on the ESPN+ app.