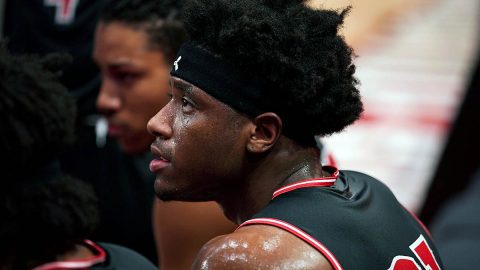 The stakes are as high for this rivalry as they’ve been in years.

An Austin Peay State University win pulls the Govs equal to the Racers at the top of the Ohio Valley Conference, and would give the Govs the edge in head-to-head matchups; a loss would put the Racers two games up on the league in the loss column with five league contests remaining.

Thursday’s game will be a Red Out—all fans are encouraged, to quote Director of Athletics Gerald Harrison [1], See Red! The first 250 students in attendance will receive priority seating in the lower level and can pick up a red “I’m A Gov” t-shirt at the marketing table, and pizza courtesy Michael’s Pizza.

Gates open at 4:00pm for the women’s game; after the 250 seats are filled in the lower bowl, students will be redirected to the upper bowl area. Game sponsor First Financial Bank will provide 500 red Battle of the Border shirts while supplies last, and provide those shirts to students after the 250 “I’m A Gov” shirts are gone.

Ja Morant is now in Memphis, the NBA version, where he’s leading the Grizzlies to unexpected success in a tough Western Conference. Delightful for him, and for Ohio Valley Conference defenders who no longer have to figure out a way to stop him.

But Murray State doesn’t rebuild; the Racers reload, and Matt McMahon has once again assembled a deep, talented team around the skillset of Tevin Brown, who was the Robin to Morant’s Batman last year.

Brown has developed into one of the nation’s sharpshooters, hitting 45.1 percent from three and making more than three per game on his way to 18.5 points per game. Brown’s Racer brethren don’t take many threes per night, but they make them at a rate (36.8 percent) which leads the OVC and ranks 38th nationally.

Murray State has hassled opponents on the glass all season, with Anthony Smith and KJ Williams combining for 15.3 boards per game. Smith, whose senior season was cut short in December 2018, was granted his fifth year of eligibility and responded with 9.8 points and 8.0 rebounds per game, including some very Terry Taylor [3]-esque efforts against Southeast Missouri (22 points, 10 rebounds), UT Martin (17 and 12) and Brescia (13 and 14). The battle between Taylor and Eli Abaev [4] against Murray State’s efficient duo is one of the most intriguing subplots in a contest full of them.

With Morant gone, Murray State has turned over the offensive reigns to a redshirt freshman who spent 2018-19 learning from his predecessor. The ball movement the Racers displayed with Morant at the helm has continued, with Murray State averaging 14.7 assists per game, led by DaQuan Smith at 3.9.

The Govs closed out the 2019 regular season with a 94-83 loss at Murray State, despite a 16-point first half from Steve Harris [5] in his first appearance as a reserve since November and four first-half threes from Terry Taylor [3].

The APSU Govs led by as many as six points early in the second half, but foul trouble for a host of Govs and a 55 percent shooting mark overall for the Racers conspired to send Austin Peay State University into the 2019 OVC Tournament on a two-game slide.

Terry Taylor [3] and Murray State’s Tevin Brown are two of the most vital players in the nation to their teams fortunes; via cbbreference.com’s Win Shares metric (an estimate of the number of wins a player has contributed to due to their offense and defense), Taylor is second nationally with 5.4 win shares, while Brown ranks 14th at 4.8.

A loss would be Austin Peay State University’s first in the Dunn Center since February 14th, 2019.

The APSU Govs are at plus-5.3 in average rebound margin and plus-3.0 in turnover margin since OVC play began, January 2nd.

Austin Peay State University Governors Courtside Seating is winding down for the 2019-20 season. Fans can contact the APSU Athletics Ticket Office for courtside seating availability and pricing. The VIPeay Hoops Experience, available to Black Tie Monocle Society members and above, also returns for 2019-20 after a successful debut last season.

For more information on joining the Governors in the Dunn Center this winter or to become involved with the Monocle Society, call 931.221.PEAY. You can also purchase tickets online at www.LetsGoPeay.com/buytickets; [7] be sure to access the new 360-degree view of the Dunn Center when purchasing tickets.

Check back at LetsGoPeay.com and on Austin Peay State University’s Official Athletics Facebook page often for up-to-date news about all Governor athletics, as well as the APSU Governor men’s basketball Twitter page (@AustinPeayMBB). Live stats will be available during the game at PeayStats.com, and all home games and Ohio Valley Conference games can be viewed on the ESPN+ app, although as mentioned, this marquee matchup will take place on ESPNU.