This will mark the 67th meeting in a series that began in 1977, with Tennessee leading 51-15 after the Lady Vols defeated the Tigers, 63-58, in Knoxville earlier this season on January 26th.

UT and LSU enter the game tied for third in the Southeastern Conference standings at 7-3, and the winner will take sole possession of the three spot. 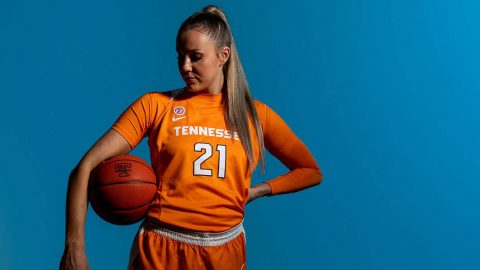 Tennessee Women’s Basketball is on the road Thursday to take on LSU. (UT Athletics)

The loser, meanwhile, will fall into a tie with Arkansas and Kentucky in fourth place.

In addition to conference seeding, Thursday night’s contest offers Tennessee an opportunity against an LSU squad that ranks No. 24 in the RPI.

Thursday night’s game will be streamed on SECN+ with Lyn Rollins (PxP) and Victor Howell (Analyst) handling the call.

Counting those three losses and the setback to No. 1 Stanford on December 18th, four of Tennessee’s six losses this season are to teams ranked in the nation’s top eight.

UT had won six straight SEC contests before falling in back-to-back games vs. No. 1/2 South Carolina and No. 8/8 Mississippi State.

Rae Burrell [3] had a 20-point, 10-rebound double-double vs. Mississippi State and is averaging 12.0 ppg. and 5.7 rebounds over the past three contests.

Jazmine Massengill [4] is averaging 10.3 ppg. and shooting 52.0 percent over the last three games.

LSU lost senior leader Ayana Mitchell for the season after she suffered a knee injury vs. Texas A&M on February 2nd.

The Tigers, however, managed to overcome that terrible misfortune to beat the Aggies, 59-58, in Baton Rouge on February 2nd.

LSU followed that with a 66-58 home triumph over Missouri on Monday night to extend its winning streak to three games.

The Bayou Bengals are 10-1 at home this season, including 5-0 in SEC games with wins over Alabama, Ole Miss, Kentucky, Texas A&M and Missouri at the PMAC.

LSU’s only home loss came vs. Florida State, which currently ranks No. 14 in both polls.

Tennessee is closing out a four-game swing where it has played three of four away from home.

LSU plays its next two on the road, traveling to Auburn on February 16th and to No. 1 South Carolina on February 20th.

Their only losses are to four top-eight teams (South Carolina, Stanford, UConn, Mississippi State), No. 13/13 Kentucky and Texas.

Tennessee did not begin the season in either the AP or USA TODAY Coaches polls.

UT was picked sixth by the media and seventh by the coaches in the 2019 SEC Preseason Polls.

Six of UT’s 12 players this season had never played in this program before.

AFTER all of the preseason picks were made, one of UT’s two returning starters, Zaay Green [7], was lost for the season after two games due to a torn ACL.

With Green’s season-ending injury, Tennessee has lost five of its top six players from a year ago.

The No. 23/25 Lady Vols took a lead into the second quarter but couldn’t hang on, falling to No. 8/8 Mississippi State on Thursday night in Thompson-Boling Arena, 72-55.

Sophomore Rae Burrell [3] led Tennessee (17-6, 7-3 SEC), scoring 20 points and pulling down 10 boards to record a double-double in her first career start and her third overall. Freshman Jordan Horston [8] and sophomore Jazmine Massengill [4] were also in double digits with 12 and 11, respectively, as the Lady Vols played without leading scorer Rennia Davis [2] (18.1 ppg.), who was recovering from a bout with the flu.

UT out-rebounded Mississippi State, 40-39, as both teams recorded 16 offensive boards. Tennessee shot at a 36.2 percent clip from the field while holding the Bulldogs to a 40-percent performance that was 7.5 percent below their 47.5 season mark. The Big Orange also held MSU 9.5 points below their typical scoring average of 81.5.

Tennessee has won 14 of the last 18 games, including the last three in a row, but has dropped its last two in Baton Rouge.

The Lady Vols are 1-1 vs. LSU in overtime games. The last time the two teams went to OT was on March 1st, 1997. Tennessee won the game 100-99 to advance to the semifinals of the SEC Tournament.

The last time these programs met in the SEC Tournament was last season on March 7, as the Lady Vols captured a 69-66 squeaker over LSU to clinch an NCAA Tournament bid.

At least one team has been ranked in this series in 64 of the 66 games that have been played.

The Tigers returned nine letterwinners, including four starters, from last season’s team that finished 16-13 overall and 7-9 in SEC play (t8th).

LSU was picked to finish eighth by the media and sixth by the coaches in the SEC preseason polls.

Redshirt junior Faustine Aifuwa tallied a season-high 19 points and tied her career high for rebounds with 16.

Richard-Harris was perfect from the free throw line, hitting eight of eight attempts and contributing to a team free throw percentage of 77.8.

LSU (14-5, 4-3 SEC) was led by redshirt senior Ayana Mitchell, who logged a double-double with 24 points and 12 rebounds. Khayla Pointer was also in double figures for the Tigers with 12.

The Lady Vols (17-4, 5-3 SEC) hit 9-for-30 from the field over the final 20 minutes and saw a five-point halftime lead slip away. UT was also faced with foul trouble in the second half, as six players picked up at least three personal fouls.

LSU (13-6, 5-3 SEC) was fueled by a dominant effort on the glass, including 23 offensive rebounds. Chloe Jackson led the Lady Tigers with 21 points and nine boards. Raigyne Louis added 18 points.