Clarksville, TN – After a quick one match road trip, the Austin Peay State University (APSU) men’s tennis team is set to kick off a four match home stand with a 2:30pm, Friday, February 14th, 2020 match against the Eagles of Carson Newman at the Governors Tennis Center. 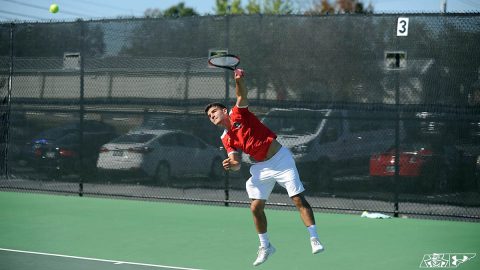 The top-three in the lineup stayed the same in the match versus Wright State, with Christian Edison [4] playing as the No.1, Anton Damberg [5] as the No.2, and Julius Gold [6] as the No. 3.

In doubles action, the Govs top-two duos have yet to change this spring, with Lorino and Edison playing as the No. 1 pairing and Damberg and Gold playing as the No. 2 pairing. The No. 3 doubles position has been manned by Andersson with the combination of Thiago Nogueira [7] and Sanders. Nogueria got the nod last time out, as he and Andersson fell to the No. 3 duo from Wright State.

About The Carson Newman Eagles

Carson Newman enters Friday’s match 4-0 and off to the best start in program history. There has been no set lineup for the Eagles this spring, as at least two people have played at every position in the lineup through their first four matches. While the Eagles have been solid in singles play, starting the season 19-5, they have struggled in doubles play, only going 7-5 in doubles in their first four matches.