APSU Women’s Basketball roars back in the fourth to defeat Murray State, 69-61

Clarksville, TN – They say it’s not about how you start, it’s about how you finish. That was the case for the Austin Peay State University (APSU) women’s basketball, who trailed for the first 32:58 against the Murray State Racers, before strong defense effort in the fourth quarter led the Governors to a comeback, 69-61, win in the Dunn Center, Thursday. 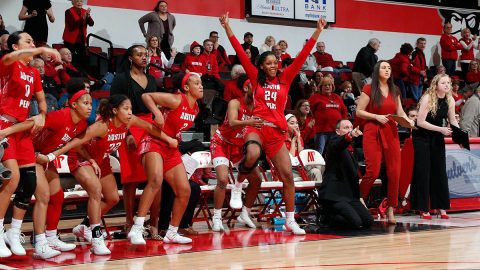 It was a slow start to the game for everyone wearing red, except for Brandi Ferby [1].

With the Governors trailing after Murray State opened the game on an 11-2 run, Nieja Crawford [2] connected on a pair of free throws, before Ferby buried the Govs first triple of the day to cut the deficit back to four.

Down four with 2:38 left in the first quarter, Brandi Ferby [1] got to the line, where she knocked down a pair of free throws. On the next possession, Ferby banked in a jumper from the elbow to complete her own 4-0 run and tie the game for the first time since the opening tip.

But the game did not stay knotted up long, as Murray State scored the final three point of the quarter and held a three-point lead over the Governors after one.

In the second quarter it was once again Brandi Ferby [1] leading the Austin Peay State University charge. With 6:28 left in the half, Ferby found the range once again, connecting on her second triple of the day to bring the Governors back within one. But the ensuing 13-4 run by the Racers stretched the Murray State lead to 10 – the biggest of the half.

But the Govs kept the Racers in striking distance, answering the Racers run with five unanswered points of their own. A Macey Turley three-pointer with a 1:29 left before the half put the Racers back up by eight points, but Brandi Ferby [1] got the final bucket of the half; going one-on-one with a Racer defender and beating her and the buzzer to cut the deficit to six at the break.

Things did not look good for the Governors at the start of the second half, as an Alex Burpo three-pointer gave the Racers their biggest lead of the night – 11 points with 7:11 left in the quarter. But, as she had done all night, Brandi Ferby [1] connected from three-point range again to keep the Govs in the game.

With 5:17 left in the third, Murray State held a ten-point lead over the Govs, but then a comeback began. A pair of Arielle Gonzalez-Varner [3] free throws cut the deficit to eight. Then, with the shot clock winding down, Brandi Ferby [1] buried a deep three-pointer to match her career high with 19 points. Finally, Ella Sawyer [4] knocked down a pair of free throws, and all of a sudden a 7-0 run by the Govs had cut the deficit to three heading into the fourth quarter.

The Governors didn’t waste any time, as Shay-Lee Kirby [5] drilled a triple 15 seconds into the frame to tie the game for the first time since there was 2:38 left in the first quarter. Two possessions later, Sawyer missed a contested layup, but pulled down the rebound and found a wide-open Maggie Knowles [6], who splashed her first three of the day to give the Govs their first lead of the day.

With 5:28 left in the contest, a Sawyer rebound led to a Gonzalez-Varner layup on a runout, giving the Govs their first three-point advantage of the day. But the Racers immediately answered, connecting on a triple of their own to tie the game at 55.

With just under five minutes remaining, Kasey Kidwell [8] drove the lane and kicked to a wide-open Knowles in the corner, who buried another trey to put the Govs back on top by three. But once again the Governors could not pull away, as the Racers tied the game up at 58.

But that was the last time Murray State would hold a piece of the lead, as Sawyer find Knowles slicing to the basketball on the next possession down the court to give the lead back to the Governors.

The Gonzalez-Varner took over, pulling down a defensive rebound on one end, and then hitting a layup on the other end. With 1:07 left on the clock, Gonzalez-Varner delivered the final dagger, jumping a passing lane and cruising to a wide-open layup to give the Govs a six-point advantage.

Down by six with less than a minute on the clock, the Racers fouled Gonzalez-Varner twice – she knocked down all four free throws to finish the game with 14 points. Finally, Murray State fouled one last time, sending Brandi Ferby [1] to the line. Ferby knocked down one free throw, giving her a career-high 20 points as the Governors secured a crucial win and some separation in the OVC standings.

The fourth quarter. Austin Peay State University outscored Murray State 26-15 in the fourth quarter, led by senior Arielle Gonzalez-Varner [3], who posted 12 points in the final ten minutes. The Cincinnati native was in attack mode in the final quarter getting to the free throw line three times, and knocking down all six free throws. Knowles added eight more points in the final frame, burying a pair of three-pointers to help the Govs complete a double-digit comeback win.

The APSU Govs have now won three of the last four games against Murray State.

The Governors connected eight times from three-point range, and have now made 205 three-pointers this season – they are the third team in program history to make 200-plus threes in a single season.

For the first time this season, Austin Peay State University did not turn the ball over double-digit times, committing a season-low six turnovers.

The Governors reserves outscored the Murray State bench 45-12, it was the seventh time this season the Austin Peay State University bench has scored 40-plus points.

Austin Peay State University  outscored Murray State 18-0 on points off turnovers, improving to 13-5 this season when they outscore the opponent off turnovers.

The Govs shot 86.4 percent from the free throw line, their second-best single game percentage this season.

Austin Peay State University outshot Murray State 19-13 at the free throw line, the Govs improved to 8-0 this season when they make more free throws than the opposition.

19 made free-throws is tied for the APSU Govs second-best single game total this season.

The Governors 11-point comeback is tied for their second biggest come from behind victory this season.

Brandi Ferby [1] led the APSU Govs in scoring for the second time this season, posting a career-high 20 points.

Arielle Gonzalez-Varner [3] scored 18 points, her most since a 22-point performance against UT Martin, Jan. 4.

Gonzalez-Varner pulled down 8 rebounds to lead the Govs on the glass for the 15th time this season.

Maggie Knowles [6] knocked down a pair of three-pointers en route to 10 points, her first double-digit performance since the Governors played Belmont, January 25th.

Opening remarks
“The next game is the most important one everyone you play. But you look at the standings and we have to make a late season push, there is no doubt about that. So to be down double-figures and turn up the defense, even when shots weren’t falling in the third period, we still played the same way and had some mental toughness and some grit about us. It was fun to watch, and it was fun to coach.

On postseason implications
“The bad thing about it is there is not going to be a whole lot of space. We are basically in the tournament right now, you can call it right there.  We want to play well, we have wanted to play well since November, but every team wants to be playing their best basketball in mid to late February, and we have too if we want to have a chance at Evansville.”


On the fourth quarter
“I liked it because defense. We have talked about defense, defense, and defense, and shots will eventually fall, and they did. I was proud of our third period because we were 3-of-20 from the field in the third, but I thought we had some good shots right around the basket that didn’t fall, but stuck with it and they finally fell in the fourth.”

On the defensive effort
“I thought our half court, for one of the few times this year, was as good as our full court. I thought we made them take a more difficult shots, and they are a very talented basketball team. They have scored in bunches in games this season; they have drivers, they have shooters, and they have scorers, so I commend our ladies on how they played defense today.

The Austin Peay State University women’s basketball team will have another quick turnaround, as the Governors will welcome Eastern Kentucky to the Dunn Center for a 1:30pm, Saturday contest. The Colonels will come into Saturday’s contest on a two-game winning streak, after dispatching Morehead State, 68-47, Thursday.