Clarksville, TN – After going 1-1 at Chattanooga to open the 2020 season, the Austin Peay State University (APSU) softball team will head to Mobile, AL, this weekend to play in the first of five in-season tournaments for the Governors, the Jaguar Challenge hosted by South Alabama. 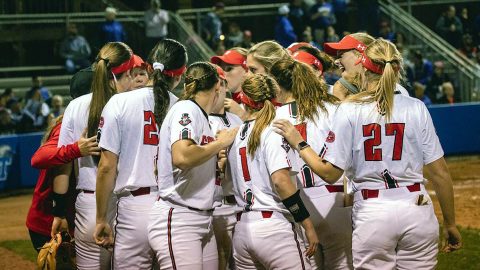 The Govs and South Alabama will be joined by Evansville and Louisiana Tech to make up the tournament field.

Austin Peay State University will open play Friday, 3:45pm, versus Evansville, followed by a 6:00pm contest versus the tournament host South Alabama. On Saturday, the Govs will face Louisiana Teach at 10:00am, with a rematch versus South Alabama coming that afternoon at 2:30pm. The APSU Govs will conclude play in the tournament on Sunday, 10:00am, versus Louisiana Tech.

The Govs were led at the plate last weekend by junior outfielder Bailey Shorter [1], who recorded four hits in seven at bats, including driving in the game-tying run in the fifth inning of Game 2.

Redshirt sophomore first baseman Emily Harkleroad [2] also made a triumphant return to the starting lineup, after missing the 2019 season due to an injury, by going 2-for-5 at the plate including a double and scoring a run.

Sophomore third baseman Lexi Osowski [3] had the Govs only other extra-base hit versus Chattanooga, a two-run homer in Game 2.

In the circle for the Govs, freshman Shelby Harpe [4] picked up her first collegiate start and win throwing a complete game 4-1 victory versus the Mocs, in Game 2 of the doubleheader, allowing only one run on seven hits while walking four and striking out five.

Evansville
The Aces come into the weekend after going 3-2 at the Total Control Sports Invitational last weekend, where they picked up wins versus Miami (Ohio), Western Illinois and Green Bay. They are led at the plate by Jessica Fehr, who is batting .500 with five hits in 10 at bats this season, while Eryn Gould and Alyssa Barela have two home runs each. In the circle, Emily Lockhart has two of the team’s three wins, with a 3.14 ERA and nine strikeouts in 14.1 innings of work.

Louisiana Tech
The Lady Techsters come into this weekend with a 1-4 record, after opening the season at the Big East Classic in New Orleans, where they opened the tournament with a win versus Alabama A&M. Tech had three players hit over .300 in their opening weekend, led by Marilyn Rizzato’s five hits, including a double, home run and five runs driven in. Bre Hernandez leads Tech’s pitchers with a 1-1 record, including a 2.33 ERA and eight strikeouts in 12 innings pitched.

South Alabama
The Jaguars enter their home tournament with a 1-5 record after picking up a 6-2 mid-week victory over Southern. Kennedy Cronan leads South Alabama’s offense with five hits and four walks in 16 total plate appearances, while Shelby Sloan and MC Nichols also have five hits each this season. In the circle, Jenna Hardy leads the Jaguars with a 1-2 record, including a 2.94 ERA and 10 strikeouts in 16.2 innings pitched.

This weekend’s tournament will be the second time the APSU Govs have played in a tournament hosted by South Alabama, with the other being the Mardi Gras Invitational to open the 2014 season.

The game versus Evansville to open the weekend will be the 50th meeting between the two schools, the 10th-most played series in program history.

Austin Peay State University and Louisiana Tech’s games this weekend are their first meeting on the softball diamond since the 2008 season.

The Jaguar Challenge will mark the 17th time that the Govs have played a tournament in the State of Alabama, tying Georgia for the most in program history.

Austin Peay State University, Oregon and New Mexico State were the only three of 236 Division I teams that played games last week to not commit an error.