Nashville, TN – In what has been described as their best played game of the year, the Nashville Predators pitched a shutout against the visiting New York Islanders, and former coach, Barry Trotz, 5–0

Craig Smith scored the hat trick tonight, getting the Predators off to a hot start just 35 seconds into the game with his first of three goals and Nashville was off and running, 1-0.

The Predators, who are fighting to make the playoffs, began an ambitious schedule tonight that features eight games on home ice over the next two weeks. 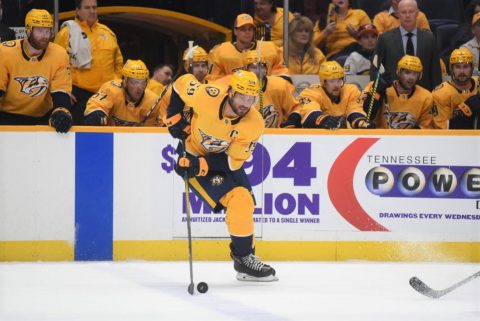 It was all about the Craig Smith display thought tonight.  At 7:41 of the opening period, Smith scored again, taking a Rocco Grimaldi pass and scoring from the slot and Nashville took a 2-0 lead.

Mattias Ekholm, the big Swedish Redwood, would score at 13:33 of the first period, taking a feed from Calle Jarnkrok and firing a wrist shot on the short side of starting goalie Thomas Greiss for the 3-0 lead.  Greiss would be pulled at that point, replaced by Semyon Varlamov.

Not much changed in the second period as the Predators were hitting on all cylinders tonight.

Rocco Grimaldi would get on the score sheet at 4:41, stealing the puck in the neutral zone and getting a one-on-one opportunity with his wrist shot that found the back of the net, 4-0 Predators.

The Islanders had no answer for starting Nashville goalie Juuse Saros, who scored the shut out victory.  Saros is now 5-2 under new head coach John Hynes, and appears to have taken the number one spot in goal, over perennial starter, Pekka Rinne.

At 11:38 of the second period, it would only be fitting that Craig Smith end the scoring on the night, completing the hat-trick with a wrist shot, and giving us our final score, 5-0.

New York out shot the Predators, 31-26, with Saros swatting away all 31 shots.

Nashville will head to St. Louis for a weekend “back-to-back” series against the defending Stanley Cup Champion Blues.  Saturday night in St. Louis, the Nashville on Sunday.

Sunday game-time is 5:00pm and is part of “Hockey Night in America.”