Saturday’s game can be seen on SEC Network, online through WatchESPN, which can be accessed at espn.com/watch, and on any mobile device through the ESPN App. Mike Morgan and Pat Bradley will have the call. 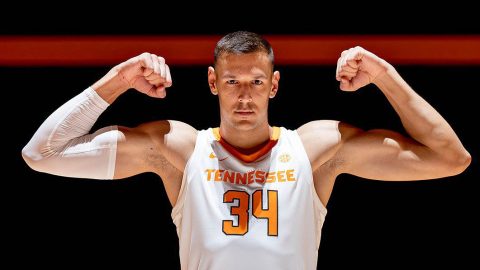 Last time out, the Vols raced past Arkansas to the tune of an 82-61 scoreline on Tuesday night inside Thompson-Boling Arena. Freshman Santiago Vescovi [2] led the way for UT, scoring a season-high 20 points and dishing off a season-high eight assists.

Senior Jordan Bowden [3] added 16 points, finishing 7-of-16 from the field. Junior John Fulkerson [4] was efficient while battling flu-like symptoms. Fulkerson finished the night with 14 points and a game-high eight rebounds.

Up next, Tennessee returns home to Thompson-Boling arena for a Tuesday night matchup with Vanderbilt. Tipoff is set for 5:30pm CT on SEC Network.

Tennessee leads the all-time series with South Carolina, 47-27, dating to 1927. The Vols are riding a five-game win streak against the Gamecocks.

The series is deadlocked at 16-16 when contested in Columbia.

Give the Vols a winning record against the Gamecocks in Columbia.

Make Tennessee 11-0 in SEC regular-season rematch games since the start of the 2017-18 campaign.

Tennessee averaged 14.3 turnovers through its first 17 games but has averaged only 10.6 turnovers in its last six outings.

Vols freshman Josiah-Jordan James [7] has missed Tennessee’s last four games with a groin injury. He had started every game prior to this setback, and his current status is day-to-day.

Junior forward Yves Pons [5] has blocked at least one shot in every game this season. He leads the SEC and ranks 20th nationally with 2.6 bpg. His 2.8 bpg during SEC play also leads the league.

Freshman point guard Santiago Vescovi [2] has made at least one 3-pointer in every game in which he’s appeared (12), averaging 2.3 made threes per game.

Barring injury or illness, senior guard Jordan Bowden [3] will finish his career in the top five on Tennessee’s list for career games played. Saturday will be the 126th game in which he’s appeared.

After falling to Tennessee on January 11th in Knoxville, South Carolina has reeled off wins in seven of its last nine contests, with notable victories at home over Kentucky and on the road at Arkansas. The Gamecocks currently sit at 15-9 (7-4 SEC).

South Carolina head coach Frank Martin has the Gamecocks trending in the right direction as the 2019-20 regular season nears its conclusion. The 7-4 SEC mark has South Carolina in a tie for fourth place in the league and in the hunt for a double-bye at the conference tournament next month.

Senior forward Maik Kotsar continues to be a force for South Carolina on both ends of the floor. He ranks third on the Gamecocks in scoring (10.3 ppg), second in assists (2.1 apg) and first in rebounding (6.4 rpg), blocks (1.1 bpg) and steals (1.6 spg).

Sophomore guard A.J. Lawson continues to be the Gamecocks’ main scoring threat. While the Toronto, Canada, native has seen his overall scoring average drop since last facing the Vols, he has strung together one of his best stretches of games in recent weeks. In the Gamecocks’ last five contests, he is averaging 15 points (eclipsing the 15-point mark three times) while scoring a game-high 20 points in South Carolina’s big win at Georgia Tuesday night.

A strong defensive effort and a drawn charge by John Fulkerson [4] in the closing seconds propelled Tennessee to a 56-55 win over South Carolina on January 11th, 2020, at Thompson-Boling Arena.

With Tennessee leading by one with six seconds remaining, South Carolina guard A.J. Lawson grabbed the rebound off a UT missed 3-pointer and raced the length of the court to attempt a go-ahead shot. As Lawson drove down the lane, Fulkerson stepped in front and drew a charge with 1.4 seconds remaining, securing the win.

Fulkerson led the Vols in scoring with 15 points and also grabbed 10 rebounds, achieving the second double-double of his career and first of the season. Freshmen Santiago Vescovi [2] and Josiah-Jordan James [7] added 13 and 10 points, respectively.

Defensively, Tennessee held its opponent to less than 60 points for the seventh time and recorded a season-high 11 blocked shots.

Maik Kotsar had 17 points and Jermaine Couisnard had 15 to pace South Carolina.

After coming out of halftime with a one-point lead, South Carolina opened the second half on a 13-6 run, as Tennessee converted on just two of its first nine attempts from the field.

With the Gamecocks holding their largest lead of the game at 39-31, the Vols came alive on the offensive end with a 20-5 run, capped by back-to-back threes from the freshman duo of Drew Pember [9] and James. The run put Tennessee in front, 51-44, a lead it would not relinquish.

Over the course of the run, UT held South Carolina without a field goal for more than six minutes, as the Gamecocks missed 10 consecutive shots.

South Carolina took a 26-25 lead into halftime in a first half marred by scoring droughts and shooting struggles. The Vols shot just 7-for-27 (.259) from the field during the game’s opening period.

2011 first-team All-SEC guard Scotty Hopson had a bright career against South Carolina, owning a sterling 6-0 record vs. the Cocks. Hopson threw down a posterizing dunk in the 2011 Knoxville win that placed fourth in the CBS Dunk of the Year Contest.

The two squared off seven times as coaches in the Big 12 Conference, when Barnes was with Texas and Martin was at Kansas State.

Over the last two seasons, Rick Barnes [11] and his staff guided the Volunteers to a 10-0 record in regular-season rematch games (SEC Tournament games not included).
Saturday’s showdown against the Gamecocks is UT’s first rematch game this season.

History indicates that teams are likely to experience a lengthy scoring drought when they face the Vols.

13 times this season, Tennessee has held an opponent scoreless or without a field goal for a span exceeding five minutes of game action. That includes a span of 5:52 during which the Vols held Arkansas scoreless on Tuesday.