This is the first of a “back-to-back” series against the Blues, with St. Louis visiting Nashville on Sunday afternoon.

This game is a nationally telecast contest as part of “Hockey Day in America.”

The tone of this game was set early when Nashville’s Filip Forsberg dropped the gloves against Brayden Shenn of the Blues at 4:54 of the opening period. 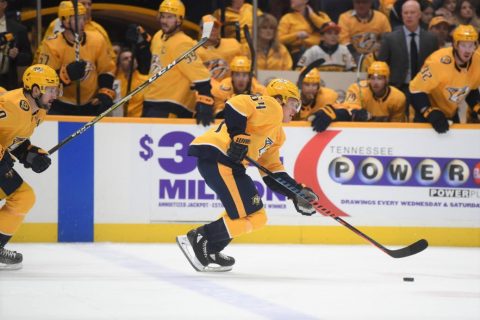 Both players drew five minute fighting penalties, but the stage was set for heated contest between the two teams.  Nashville has won all three games against the Blues this season.

Viktor Arvidsson, scored the opening goal for the Predators at 6:29, when he took a pass from Mikael Granlund from behind the net, and scored a short sided goal for the early 1-0 lead.

Arvidsson was injured during an earlier win against St. Louis and missed 12 games.

More fisticuffs came at 8:59 when Robert Bortuzzo and Jarred Tinordi squared off at center ice.  Both were sent off for five minute penalties, but this game was just “ramping up.”

Matt Duchene then scored at 12:23, taking a pass from Forsberg and scored another short sided wrist shot to extend the score for the Predators, 2-0.

But you knew the Blues were not going to go quietly into the night, and as the second period began, St. Louis looked like they were the hunters after the hunted.

Zack Sanford got St. Louis on the board at 4:13 of the second period when he hammered a shot from the point that beat Juuse Saros in net for the Predators, and suddenly the score was 2-1.

Then just 21 seconds later, the Predators answered back when Kyle Turris grabbed a pass from Matt Duchene and wired a wrist shot into the back of the net to answer the Blues and regain the two goal Predators lead, 3-1.

Then at 6:18, Jaden Schwartz scored on a deflection from a Brayden Schenn shot on net, cutting the St. Louis deficit to 3-2.

At 10:50, the Predators failed to clear the puck from behind their goal, and Alexander Steen slipped the puck past Saros and the game was tied, 3-3.

The third period began as contentious as the first two when the two teams returned to the ice.  This game had a “playoff” feel to it right from the start, something that Preds fans feel is needed for their team to fight their way into the playoffs.

At 3:59 of the final frame, Mikael Granlund followed up a rebound off of a Roman Josi shot on net and the power play goal gave the Predators the winning goal, 4-3.

From there on out, it was just a matter of Nashville holding off the hard charging Blues to the finish line.

There will be plenty of unsettled scores in tomorrow afternoon’s match-up as the two teams return to the ice at 5:00pm at Bridgestone Arena.