The Lady Vols and Aggies enter the contest in a tie for fourth place in the conference standings along with Arkansas and Kentucky at 7-4.

UK has a win over UT, and the Big Orange women face A&M and UA in their next two games. 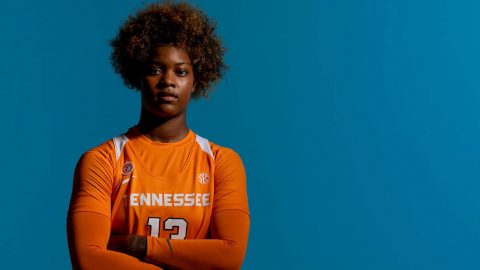 In addition to conference seeding, Sunday’s contest offers Tennessee an opportunity against an A&M squad that ranks No. 18 in the RPI.

As of February 13th, the Lady Vols occupy the No. 47 spot in the RPI, with upcoming games against Texas A&M (No. 18)  and Arkansas (38) providing a chance to improve that stock.

This will mark the 14th meeting in a series that began in 1997 when Lady Vol head coach Kellie (Jolly) Harper was Pat Summitt’s point guard. UT leads 8-5.

Sunday’s game will be televised by ESPN2 with Roy Philpott (PxP) and Brooke Weisbrod (Analyst) handling the call.

Tennessee’s #12KinTBA promotion has drawn great interest. A season-best crowd surpassing 12,000 is expected on Sunday, so fans should plan to arrive on campus early.

The first 500 kids (12 and under) in attendance will receive a free replica #14 Kellie Jolly (Harper) youth jersey. Child must pick up a voucher and be present with voucher to redeem.

It’s Big Orange Family Day. UTK faculty and staff can receive two free tickets to the game by showing I.D. at the ticket window at Thompson-Boling Arena on game day. All deans, faculty and family participating in the Dean’s Battle can check in for their college at the Fan HQ table at Section 129 on the concourse. Contact [3] with any questions.

High School Team Day: Take your team out for a day at the Summitt. Contact Spencer Billingsley at [4] for more details.

Postgame Layups: Kids 12 & younger can shoot a layup on the court after the game.

High-Five the Lady Vols: Kids 12 & younger can pick up a wristband at the Fan HQ table on the concourse to participate in the pregame high-five tunnel. Wristbands are limited. To purchase discounted group tickets and reserve wristbands for your team, call 865-946-7000.

Want to be the Jr.Vol of the Game? Sign up for the Jr.Vol Club today and get the chance to see yourself on the video board. Members also receive free Jr.Vol swag, tickets to games for all sports, and exclusive Jr.Vol events.

You can be a part of the Lady Vols’ electric introductions. Make sure to download our light show app courtesy of Coca-Cola. The “Hoops Hype” app is available free of charge from the Apple Store or on the Google Play Store.

The Tennessee Lady Vols will try to snap a three-game losing streak after falling in recent games vs. No. 1 South Carolina, No. 8 Mississippi State and LSU.

UT had won six straight SEC contests and stood at 7-1 before dropping those three contests.

Jordan Horston [7] is UT’s only other double-figure scorer in league play, contributing 10.5 per game.

Texas A&M enters Sunday’s battle having dropped two of its last three, including losses at LSU and Mississippi State before taking down Vanderbilt at home on Thursday evening.

All-star guard Chennedy Carter missed seven games due to an injury, but she has returned to the lineup and only bolsters an Aggie squad that has several scoring options and plays aggressive defense.

The #25 Lady Vols pulled within one but couldn’t overcome a 26-point fourth-quarter surge by LSU, falling 75-65 Thursday night in Baton Rouge.

Bench Contributing
UT’s bench outscored LSU’s bench, 20-15. It was the most points UT’s bench had contributed since scoring 23 at Vanderbilt.

A&M’s next game is at Georgia on Thursday night.

The Big Orange women are 6-5 vs. hall-of-fame coach Gary Blair and A&M since the Aggies joined the Southeastern Conference.

A&M is 2-0 in overtime games vs. UT, defeating the Lady Vols in an extra frame in two of the past three times these squads met in College Station.

Rennia Davis [6] has an 11.0 ppg. average vs. the Aggies in three career games, scoring 10 last season after tallying 12 in College Station and 11 in Knoxville the year before.

In the initial meeting between these teams in Knoxville, on February 28th, 2013, Tennessee defeated A&M, 82-72, on Senior Day to give UT an SEC regular-season championship on the Lady Vols’ home court. The squad had been picked to finish as low as fifth in the league and returned no starters.

UT’s first two contests vs. Texas A&M came in tournaments, including one regular-season event in 1997-98 and one postseason event during the 2007-08 campaign.

The famed “Three Meeks” dazzled #8/9 A&M on December 19th, 1997, as Chamique Holdsclaw tallied 29, Semeka Randall tossed in 23 and Tamika Catchings added a double-double of 21 points and 12 rebounds for #1/1 UT in the high-scoring affair.

Kellie (Jolly) Harper was UT’s point guard in that game, and she was the Lady Vols’ fourth player in double figures with 14 points on 5-of-7 shooting, including a pair of three-pointers.

After both of those tourney wins over the Aggies, the Lady Vols would advance to, and win, the NCAA Final Four in 1998 and 2008.

The Aggies returned 10 letterwinners, including all five starters, from last season’s team that finished 26-8 overall and 12-4 in SEC play (third).

Texas A&M is led by junior guard Chennedy Carter, who averages 21.6 ppg. Carter recently returned to the lineup after missing seven games due to injury. Three others average double figures.

The Aggies are coached by Gary Blair, who is 402-164 in his 17th season in College Station.

A&M was predicted to win the SEC by the coaches and picked to place second by the media.

No. 16 Texas A&M ran away with a 74-53 home win over Vanderbilt at Reed Arena on Thursday night. Junior forward N’dea Jones recorded her 12th consecutive double-double to help lead the Aggies with 17 points and 12 boards.

Tennessee outscored No. 21/22 Texas A&M 20-17 in the fourth quarter, but it wasn’t enough to overcome an Aggies team that scored 27 points on nearly 70-percent shooting in the third quarter to send the Lady Vols to a 79-62 setback on February 21st, 2019, in College Station.

Kayla Wells was the high scorer for Texas A&M (20-6, 9-4 SEC) with 29 points. Chennedy Carter was close behind with 28 points, while Shambria Washington had 11.

The Lady Vols (18-4, 6-3 SEC), who returned to the win column after dropping three of their previous four matchups, also had Mercedes Russell [16] recording 18 points and 13 rebounds to earn her 40th career double-double, while Rennia Davis [6] scored 11 and Meme Jackson [17] added 10.