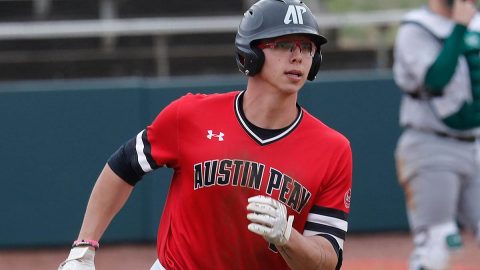 However, the APSU Govs could not fend off the Eagles through five and a half innings, entering the sixth tied 6-6.

Left fielder TJ Foreman [2] started the sixth with a single and, after a fielder’s choice, Head stepped up to the plate. He did not miss a 2-0 pitch, hitting the game’s lone home run to right center field, giving the Govs an 8-6 lead. Austin Peay State University would pull away late, tacking on a run in the eighth and four more in the ninth to secure the victory.

Govs reliever Kyle Nunn [3] (1-0) went four innings, allowing two runs on four hits to pick up the victory. Starter Tyler Thompson [4] was left with no decision despite limiting Eastern Michigan to four runs on six hits in his four innings of work. Reliever Greg Norman [5] retired the side in order in the ninth.

Center fielder Garrett Spain [6] posted his first hits of 2020 in the series finale, ending the day 3-for-4 with a double. Right fielder Skyler Luna [7] also had three hits and a RBI. Designated hitter Ty DeLancey [8] added two hits, including a bases-clearing triple in the fourth inning.

Second baseman Shane Easter went 3-for-4 with two runs scored and a RBI to pace the Eagles. Eastern Michigan (1-2) saw six different players contribute an RBI but did not score in the game’s final three innings.

Austin Peay State University baseball continues its season-opening eight game homestand when it opens play in the SAF Dirt Classic with a 3:00pm, Thursday contest against Missouri State. The Governors will recognize alumnus Craig Massoni, who is battling cancer, prior to the start of Thursday’s contest.