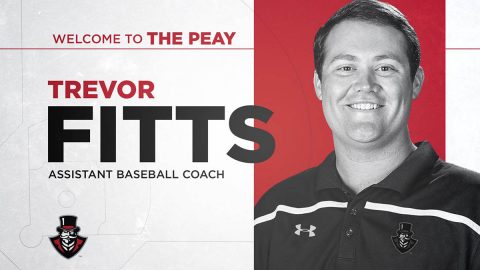 Fitts, who has appeared in the NCAA Tournament six times since 2012, replaces Grayson Crawford [2], who accepted a similar position at Lipscomb in January.

“We are so excited to welcome Trevor to Austin Peay State University,” said Janssen. “The first thing that is really easy to see about Trevor is that he has been a winner everywhere he’s been.  He has worked with some of the finest coaching staffs and baseball programs in the southeast.

“Trevor has a bright mind when it comes to pitching.  His communication skills, his positivity, and his relatability to others are all special qualities. Most importantly, his strong integrity will fit in with our coaching staff.  Trevor is going to make our players better on the field and will be a tremendous role model off of the field.”

“I’m incredibly grateful for the opportunity Travis has given me to lead the Austin Peay State University pitching staff,” said Fitts. “Every place and coaching staff I’ve been a part of has been preparing me for this opportunity, and I’m ready to get going. I’m excited to be a part of the Austin Peay family as we begin our pursuit of an OVC Championship.”

A native of Helena, Alabama, Fitts joins APSU after serving as a volunteer assistant at Jacksonville State last season, where he worked with the team’s catchers. He helped the Gamecocks win both the 2019 Ohio Valley Conference regular-season and tournament titles and reach the NCAA Baseball Championship’s Oxford Regional finals.

Before his season at Jacksonville State, Fitts was the coordinator of baseball operations at Mississippi State during the 2018 season. He was on the staff that helped the Bulldogs reach the Final Four of the 2018 College World Series in Omaha, Nebraska.

Fitts was a member of the Mississippi State pitching staff for four seasons, 2012-15. He was a member of three Bulldogs teams that played in the NCAA Division I Baseball Championship, including the 2013 team that reached the national championship series against UCLA at the CWS in 2013. Fitts appeared in 18 games during that season, including a start in Game 1 of the championship series.

During his time in Starkville, Fitts appeared made 62 appearances, finishing his career with a 10-8 record, six saves, and a 2.62 ERA in 144 innings pitched. He served as a team captain during his senior season in 2015 and was a three-time member of the Southeastern Conference’s Academic Honor Roll.

Following his collegiate career, Fitts started his coaching career in 2017 at Daphne High School while also serving as a graduate assistant at South Alabama. In addition, he spent three summers as a head coach within the East Coast Sox organization.

Fitts was a two-time Louisville Slugger High School All-American pitcher at Pelham High School, where he compiled a 31-6 career record with nine saves and 10 shutouts in 53 mound appearances. During his prep career, Fitts piled up 394 strikeouts over 269 innings. He tallied 112 strikeouts and a 1.29 ERA en route to All-America, all-state, and Shelby County Player of the Year honors in 2011. Fitts also was honored as the Alabama Baseball Coaches Association Pitcher of the Year and Birmingham News Player of the Year as a junior.

APSU begins its 2020 season with a three-game series against Eastern Michigan, Saturday-Sunday.