Clarksville, TN – For the first time, the Austin Peay State University (APSU) men’s golf team under the direction of head coach Robbie Wilson [1] will compete in a match-play format at the George Washington-hosted President’s Match Play Challenge on the Player’s Course at The Club at Weston Hills in Miami, Florida. 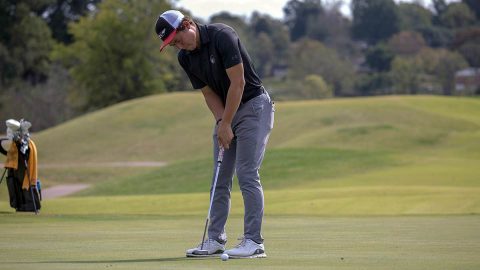 Rather than the traditional stroke-play style format, this heads-up play pits players and teams against one another, earning a point for each hole in which they best the opponent.

For Austin Peay State University, this style becomes more important with the addition to the match play component to the 2020 Ohio Valley Conference Men’s Golf Championships.

Austin Peay State University’s six-man squad is slated to play off Hole No. 10 beginning at 8:30am (CT) as the four-seed against fifth-seeded Eastern Kentucky; seeding for this event was based on the fall rankings from GolfStat.com.

If the APSU Govs defeat EKU, they’ll face the winner of the Morehead State-George Washington match in the afternoon, while a loss will pit them against the loser between the Eagles and Colonials. To win a team match, the Govs must win at least four of the six individual matches or have more individual hole victories in each individual win if the team match is deadlocked at 3-3.

Austin Lancaster [2], Chase Korte [3], Garrett Whitfield [4], Michael Busse [5], Jay Fox [6] and Micah Knisley [7] will represent Austin Peay State University in action this week. Busse ended the fall playing some of his best golf, with a 71.40 stroke average and a runner-up showing at the F&M Bank APSU Intercollegiate among the highlights.

Unfortunately, there will be no live scoring for this event. A complete recap of the action will be available after the second match at LetsGoPeay.com