Knoxville, TN – No. 25 Tennessee Lady Vols basketball team pulled to within two points in the final minute but couldn’t overcome a No. 16/18 Texas A&M team that went 28 of 33 from the free-throw line en route to a 73-71 victory in Thompson-Boling Arena on Sunday afternoon. 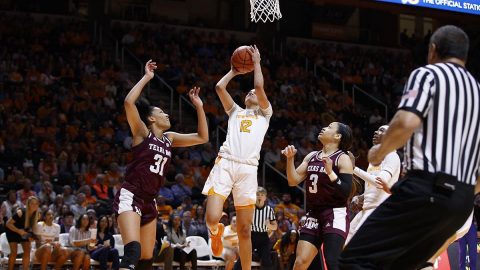 Junior Chennedy Carter was the high scorer for Texas A&M (20-5, 8-4 SEC), finishing with 37 points and five rebounds. Carter was 14 of 16 from the charity stripe for the Aggies.

After being down 6-2 early in the opening quarter, the Lady Vols tied things up at 6-6 following a dish from sophomore Jazmine Massengill [3] to Brown under the basket. UT continued its 10-0 scoring spree and took its first lead of the game after a bucket from Davis.

The Big Orange extended its lead by six after a jumper from freshman Jordan Horston [4] and another score from Davis, making it 12-6. Tennessee ended the quarter on top, 15-12, after forcing three turnovers in the final minute of the period. Davis led the team with six points and one board. UT shot at a 43.8 percent clip and held the Aggies to 40 percent.

A&M came out in the second quarter and went on a 7-0 scoring surge, but Burrell responded with a run of her own by scoring 10-straight points for the Lady Vols to help cut the Aggies’ lead to 33-27. The teams scored three more points apiece the rest of the half, with a 25-14 second-stanza burst providing the visitors with a 36-30 lead at the break. Burrell led UT over the first 20 minutes with a team-high 11 points and five boards, and the Big Orange out-rebounded TAMU in the first half, 20-18.

Coming out of the intermission, freshman Tamari Key [5] got things going for the Lady Vols with a jumper and a free throw, cutting UT’s deficit to five. The Aggies, however, then went on a 6-0 run to extend their lead to 10. Tennessee stuck around, though, as the team went on its own 6-0 run to make it a two-possession game after a three from Davis and an and-one play from Burrell.

Then, Burrell scored on a fast break and scored a bucket with another free throw, pulling UT to a 50-47 deficit. UT’s defense also was impacting play, as TAMU was held to 5-for-17 shooting on field goals during the third. The Aggies finished the period on top, 53-47.

Key scored first in the fourth, making it a four-point game again. Horston and Davis both tallied buckets on the next possessions, keeping the game within reach at 57-53. After another three-pointer from Davis, UT went on a 4-0 scoring run to pull within three points, 63-60, with just over four minutes remaining.

The Aggies went on a quick 5-0 burst of their own to gain an eight-point advantage, but the Big Orange battled back with Massengill and Brown scoring jumpers and Horston nailing a three-pointer to make it a three-point game with 32 seconds remaining.

Carter drained two more free throws with nine seconds left, but Massengill scored another jumper on the other end to narrow the gap to three points with six seconds remaining. After Ciera Johnson made a free throw, Davis finished the game with a last-second lay-in to make it a two-point final differential.

Have A Day, Rae
Sophomore Rae Burrell [1] made the most of her third career start, scoring nine-straight points in the second quarter en route to a team-high 19 points and seven rebounds. The game moves her scoring average to 10.2 ppg., making her the team’s second-highest scorer.

Unselfish Basketball
Tennessee doled out 21 assists against the Aggies, marking the eighth time this season the team has posted 20 or more assists. Rennia Davis [2] helped fuel the effort with a career-high six assists, while Jazmine Massengill [3] and Jordan Horston [4] also finished with six assists. Massengill moving her season total to 104. If the season ended today her average of 4.2 apg. would be good enough for sixth all-time among Lady Vol sophomores. Horston, meanwhile, now has 122 assists and averages 4.88 per game. The total ranks her fifth all-time among Lady Vol freshmen, and her average is currently the second-best ever by a UT rookie.

The Tennessee Lady Vols basketball team hits the road for a 7:00pm ET (6:00pm CT) tilt with Arkansas on Thursday. The contest will be televised on the SEC Network and broadcast on Lady Vol Network radio stations.