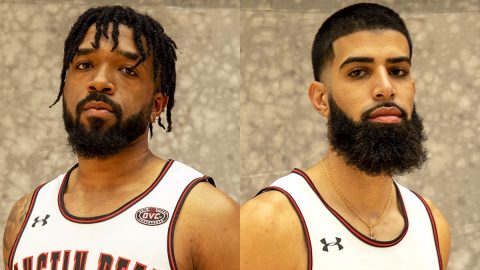 For Abaev, this marks his first newcomer honor, while Adams is one behind Chris Horton [3] for most Freshman of the Week honors in Austin Peay State University history with his eighth.

Abaev averaged a double-double for the week, posting 13.5 points and 11.5 rebounds across two games and helping the Govs take control of their own destiny atop the league.

Against Murray State, Abaev posted eight points and 11 boards and came up with one of the game’s most pivotal moments, a blocked shot in the post with the Govs up just one with less than 20 seconds to play to preserve the win. He put up a career-high 19 points and 12 rebounds against Eastern Kentucky—his third double-double in the last seven games—and attempted a career-high 18 free-throws in the contest, three shy of the Dunn Center record.

Abaev is the first Austin Peay State University player to earn OVC Newcomer of the Week honors since Jabari McGhee [4] earned the honor for January 14th, 2019.

Adams led the APSU Govs in scoring in both wins last week. He garnered 20 points and a trio of steals against the Racers, including a late three-point play to put the Govs ahead for good. He tied for the game high with 23 points against Eastern Kentucky, including a dozen in the first half, and added five rebounds, a pair of steals and a team-high three assists against the Colonels.

The duo and their teammates will return to action Thursday night in Illinois, taking on SIU Edwardsville in an 8:00pm contest.