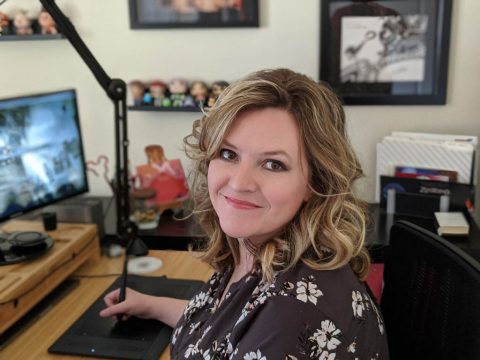 “Abels is a Clarksville resident and friend of the Austin Peay State University Department of Art + Design who works with major film, TV and animation studios such as Walt Disney Animation Studios, Rhythm and Hues and Nemesis Collective,” Michael Dickins, chair of the Visiting Artist Speaker Committee, said.

“She is credited on such films and TV series as ‘Frozen II,’ ‘Deadpool,’ ‘Game of Thrones,’ ‘A Series of Unfortunate Events,’ ‘Zootopia,’ ‘Django Unchained,’ ‘300: Rise of an Empire’ and ‘Moana.’ We are really excited for her visit as she will give an artist lecture on her creative practice and her life and career as a sought after, award-winning, Hollywood matte painter,” states Dickins.

Abels’ lecture – which is free and open to the public – is at 6:00pm Wednesday, February 26th, in the Trahern Theatre, located in the Trahern building at Austin Peay State University. All ages are welcome.

Heather Abels worked on this shot in “Frozen II.”

Abels is a senior matte painter with over 12 years of experience in the visual effects industry. Her work encompasses live-action blockbusters, animated feature films, national advertising campaigns, cutting-edge VR and concept work. She also has taught at several universities and has an ongoing workshop at CGSociety.

She has worked at top studios including Walt Disney Animation, Blur Studios, Weta Digital, Matte World Digital, The Orphanage and Rhythm & Hues. During her time at Rhythm & Hues, she became matte department supervisor. In doing so, she was able to cross the divide between artists and technicians in order to build and adapt the department to meet new demands, as seen in the Academy Award-winning film “Life of Pi.”

She worked on other Academy Award winners in best animated feature or visual effects include “Zootopia,” “Big Hero 6,” “Avatar” and “The Golden Compass.”

Abels was mentored and inspired early in her career by the legendary matte painters who made the leap from traditional painting to digital. She has focused on mentoring the new generation of artists to take the next leap and evolve from digital 2D to digital 3D matte painting techniques.

For more on Heather Abels and her work, visit www.heatherabels.com [2].