Knoxville, TN – The Tennessee Vols men’s basketball team hits the hardwood once again on Tuesday night for a clash with SEC foe and in-state rival Vanderbilt. Tipoff inside Thompson-Boling Arena is set for 5:30pm CT and the action can be seen on SEC Network.

Tuesday’s game can be seen on SEC Network, online through WatchESPN and on any mobile device through the ESPN App. Fans can access WatchESPN at espn.com/watch. Tom Hart, Andy Kennedy and Alyssa Lang will have the call. 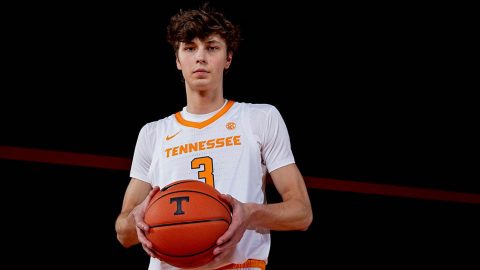 Last time out, the Vols dropped a heartbreaker in Columbia, falling 63-61 to South Carolina on Saturday night.

UT was led by junior John Fulkerson [2] who poured in a career-high 25 points and reeled in a game-high nine rebounds. Fulkerson’s 25 points came on a career-high-tying eight made field goals.

A victory on Tuesday would be the Vols sixth consecutive win over the Commodores and their third consecutive inside Thompson-Boling Arena.

Up next, Tennessee hits the road for a Saturday afternoon matchup at Auburn. Tipoff is set for 11:00am CT on CBS.

The Vols own a 72-20 edge when the series is played in Knoxville and have won two straight against Vandy at Thompson-Boling Arena.

Tennessee has won seven of the last eight meetings in this series, including each of the last five.

Prevent Tennessee from falling below .500 in SEC play for the first time since the opening week of league games.

James returned Saturday from a four-game injury absence (groin). In 30 minutes of action in his first collegiate action in his home state of South Carolina, he totaled nine points, five assists and two blocks.

During SEC play, Tennessee leads the league in blocks (6.2 bpg, which ranks sixth in Division I) and owns the conference’s best scoring defense (65.2 ppg).

SEC Defensive Player of the Year candidate Yves Pons [3] has blocked at least one shot in every game this season. He leads the SEC and ranks 18th nationally with 2.6 bpg. His 2.8 bpg during SEC play also leads the league.

Freshman point guard Santiago Vescovi [7] has made at least one 3-pointer in every game in which he’s appeared (13), averaging 2.2 made threes per game.

Barring injury or illness, senior guard Jordan Bowden [6] will finish his career in the top five on Tennessee’s list for career games played. Tuesday will be the 127th game in which he’s appeared.

Tennessee ranks third among Division I teams in assist percentage, having assisted on 64.1 percent of its field goals this season.

Vanderbilt arrives in Knoxville off three consecutive losses in SEC play. Those defeats follow the Commodores’ signature win of the year when they took down LSU inside Memorial Gym on February 5th. LSU was undefeated in SEC play going into that contest.

Since losing the SEC’s leading scorer, Aaron Nesmith, in January, the Commodores have continued to see increased production from the backcourt duo of Saben Lee and Scotty Pippen Jr. Lee and Pippen Jr. currently rank first and second on the team in scoring, assists and steals.

Lee’s team-leading 17.2 ppg also ranks sixth in the SEC, while his 18.8 ppg in conference action ranks fifth in the league. Lee also sits inside the top 10 in the SEC and leads the Commodores in both assists (sixth with 4.4 apg) and steals (seventh with 1.6 spg).

Pippen Jr. has been a solid backcourt complement to Lee, averaging 11.3 ppg, 3.8 apg and 1.0 spg, all of which rank second on the team.

First-year head coach Jerry Stackhouse looks to bring Vanderbilt its first victory in Knoxville since the 2016-17 season. A win on Tuesday would also end Tennessee’s five game win-streak over the Dores.

A dominant defensive effort and a 21-5 run to begin the second half allowed the Tennessee basketball team to push past Vanderbilt, 66-45, on January 18th, 2020, inside Memorial Gym.

The Vols held Vanderbilt to an 0-25 night from 3-point range. It was the first time since the 3-point shot was introduced in the 1986-87 season (spanning 1,080 games) that the Commodores failed to knock down at least one 3-point attempt.

Senior Jordan Bowden [6] led the Tennessee offense, finishing with 21 points while shooting 7-of-11 from the field and 7-of-8 from the foul line.

Juniors John Fulkerson [2] and Yves Pons [3] each added 12 points for the Vols.

Freshman Josiah-Jordan James [4] also was tough on the boards for the Big Orange, grabbing a game-high nine rebounds. James also dished off a game-high five assists.

Both offenses started slow, with the squads shooting a combined 37 percent (7-of-19) from the field in the contest’s opening eight minutes, good for a 9-9 score line.

During the game’s final 10 minutes, Tennessee continued to stifle the Vanderbilt offense while maintaining its efficient shooting mark on the other side of the floor, increasing its lead to as many as 22 points.

Grant Williams [9] (now with the Boston Celtics) erupted for a record-setting performance as the No. 1-ranked Volunteers held off Vanderbilt, 88-83, in overtime in Nashville on January 23rd, 2019.

Williams finished with a career-high 43 points and also tallied eight rebounds, four blocks, two assists and a steal. The junior forward was 10-of-15 from the field and a program-record 23-of-23 from the free-throw line.

Josh Richardson (now a starter for the Philadelphia 76ers) helped the Vols rally from two separate double-digit deficits in the second half by scoring 15 of his game-high 22 points in the final stanza to lift Tennessee to a 67-61 comeback win over Vanderbilt in the 2015 SEC Tournament in Nashville on March 12th, 2015. In what was the second-to-last game of his career, Richardson also led all players with three steals and was a perfect 6-for-6 from the free-throw line.

Bowden, who is a perfect 4-0 at Vandy’s Memorial Gym, averages 11.5 points in six previous games against the Commodores while shooting .438 from 3-point range and boasting a 2.8 assist/turnover ratio.

Over the last three seasons, Rick Barnes [12] and his staff guided the Volunteers to a 10-1 record in regular-season rematch games (SEC Tournament games not included).


Tennessee Vols Successful On The In State Circuit

Tennessee has won nine of its last 10 games against in-state opponents and is 16-5 vs. in-state foes under coach Rick Barnes [12].

Fulky Feasting At The Foul Line