Clarksville, TN – In control of its own destiny, the Austin Peay State University (APSU) men’s basketball team will take to the road for three of its last four games, beginning with a trip to Edwardsville to take on SIU Edwardsville in a 7:00pm, Thursday, contest at the Vadalabene Center. 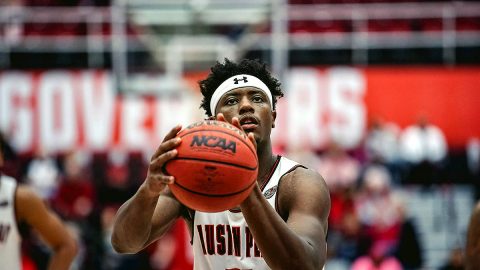 The Govs handled SIUE with ease in their last meeting, but the Cougars are in a fight for the last two seeds in the upcoming Ohio Valley Conference Tournament field and will be a formidable opponent with their backs pressed against the wall.

There’s a lot of NBA pedigree in Edwardsville; in addition to APSU Hall of Famer Bubba Wells’ time in the NBA, head coach Brian Barone is the son of former Memphis Grizzlies head coach Tony Barone, while Lamar and Shamar Wright are the twin sons of the late Lorenzen Wright, a longtime NBA veteran who played for the elder Barone in his native Memphis.

Since toppling Belmont on the opening night of league play in Nashville, it’s been feast or famine for SIU Edwardsville. The Cougars come in with four wins in the OVC, three against teams firmly in the league tournament field. They’ve also lost three of four against UT Martin, Tennessee Tech and Southeast Missouri–the teams SIU Edwardsville is battling at the bottom of the league.

SIUE’s successes come based largely on its willingness to defend. First-year head coach Brian Barone has the Cougars among the top half of the league in field goal percentage defense (43.7 percent) and trending upward in turnovers forced.

The problem seems to stem from the fact that offensively, the Cougars haven’t been able to put together anything on a consistent basis. They don’t score poorly, per se; 67.1 points is by no means the worst in the league. It just comes in fits and starts. Two games below 70 against Tennessee Tech and Jacksonville State, followed by an 84-point night against Southeast Missouri.

Three straight games below 60 to end January and start February before administering an 83-75 win against Eastern Kentucky. Zeke Moore and Cam Williams, who both scored in double figures the first time these teams met and are the only Cougars averaging double-figure scoring, can use a reliable third option.

Sometimes it’s Shamar Wright, who had 11 before fouling out against the Govs; sometimes it’s Tyresse Williford, who was held to two points in the first meeting. Sometimes it’s no one, and that’s when SIUE is in real trouble.

The Govs took care of business when the Cougars visited Clarksville, January 30th, crushing SIU Edwardsville in a wire-to-wire 82-58 affair. Five Govs scored in double figures, with Jordyn Adams [2] leading the way at 17 points . Eli Abaev [3] posted a 13-point, 10-rebound double-double and the Govs collectively held the Cougars to a sparse 41.8 percent shooting from the floor.

A win would be Austin Peay State University’s 11th straight against the Cougars, the Govs longest active streak against an Ohio Valley Conference opponent.

Taylor is now the nation’s ninth-leading scorer at 22.0 points per game; no Gov has averaged better than 22 points per game for a season since Nick Stapleton (23.1 ppg) in 2001-02, which was the last season a Gov finished top-10 in Division I in scoring; Stapleton finished seventh nationally.

Since the start of league play, Austin Peay State University is controlling the glass and maintaining possession–two keys to league success. The Govs are at plus-5.8 in average rebound margin and plus-3.6 in turnover margin since OVC play began, January 2nd.

Since the Georgia contest, Austin Peay State University’s first with Carlos Paez [5] and Antwuan Butler [6] manning backcourt duties as dual-threat ball-handlers and distributors, Austin Peay State University’s ball-possession has taken off, coinciding with a 12-3 record. The duo is posting a 3.3-to-1 assist-to-turnover ratio when in the starting lineup together, committing a paltry 2.2 turnovers per game in a combined 54 minutes per game.

A win would be the APSU Govs fifth straight on the road against SIU Edwardsville and give Austin Peay State University five road wins for the third consecutive season.

Governors Courtside Seating is winding down for the 2019-20 season. Fans can contact the APSU Athletics Ticket Office for courtside seating availability and pricing. The VIPeay Hoops Experience, available to Black Tie Monocle Society members and above, also returns for 2019-20 after a successful debut last season. For more information on joining the Governors in the Dunn Center this winter or to become involved with the Monocle Society, call 931.221.PEAY.

You can also purchase tickets online at www.LetsGoPeay.com/buytickets; [8] be sure to access the new 360-degree view of the Dunn Center when purchasing tickets. All-session packages for the 2020 OVC Basketball Tournament are now available through the Austin Peay ticket office for $80.00.