Clarksville, TN – Having won seven-straight matches, the Austin Peay State University women’s tennis team will put their winning streak to the test with a 4:00pm, Friday, February 20th match against Louisville at the Bass-Rudd Tennis Center. After taking on the Cardinals on the road, the Governors will return home for an 11:00am, Saturday match against North Alabama and a 12:00pm, Sunday match against Middle Tennessee. 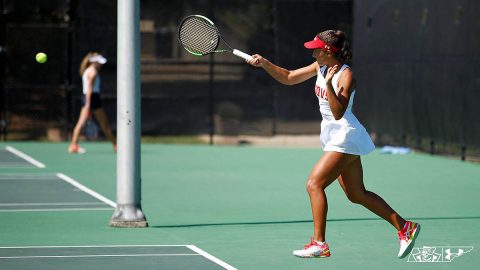 After dropping the first match of the season, the Govs have been red-hot, reeling off seven-straight wins and posting 7-0 sweeps in four of those matches.

In doubles play, the Governors No. 3 pairing of Ana Albertson [1] and Sarah Heckel [2] have led the way, playing to a 6-0 record this spring. The No. 2 pairing of Fabienne Schmidt [3] and Aleks Topalovic [4] are 6-1 this spring, and are on a six-match winning streak.

After going 3-3 over their first six matches together, the Governors No.1 duo of Danielle Morris [5] and Jana Leder [6] have won their last two matches to improve to 5-3 this spring.

Albertson and Heckel have rounded out the Govs singles lineup this spring. Despite losing her last match, Albertson is off to a 4-2 start to her senior campaign. Heckel has won her last four matches en route to a 4-2 record in her first season at Austin Peay State University.

It was a perfect 6-0 start to the season for Louisville, before the Cardinals dropped their first match of the season to Furman, 6-1. Since then the Cardinals have bounced back with a win against Bowling Green, 6-1, and are set to host the Govs on Friday. Louisville played a pair of matches against Ohio Valley Conference foe Southeast Missouri, the Cardinals beat the Redhawks, 7-0 and 4-0.

It was a slow start to the season for the North Alabama, dropping their first two matches to No. 22 Tennessee, before falling on the road against Louisville twice. The Lions picked up their first win of the season against OVC foe Tennessee State, 5-2, but fell to Jacksonville State, 5-2, last time out.

Last Meeting: The Governors won 4-3 at the Adams Tennis Complex in Murfreesboro on January 19th, 2019.

Middle Tennessee State will play matches against UT Martin, Friday, and Chattanooga, Saturday, before they square off with the Govs, Sunday, in Clarksville. The Blue Raiders have played a pair of OVC opponents already this spring, beating Tennessee State, 6-1, and Murray State, 5-2.


Next Up For APSU Women’s Tennis

After the Austin Peay State University women’s tennis team play three matches in three days, they will wrap up the non-conference schedule with a 3:00pm, Friday, February 28th match at IUPUI in Indianapolis.