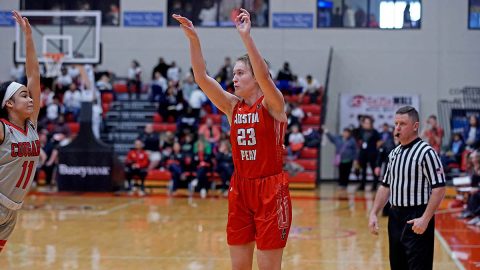 After a slow start to conference play, the Governors have won four of their last five games and own the OVC’s second-longest winning streak.

The APSU Govs now sit in seventh place in the league, and are just a game under .500 in conference play.

If Austin Peay State University can pick up their fourth-straight OVC win, Saturday against Eastern Illinois, they can post the Govs first four-game winning streak in OVC play since the 2013-14 season.

After the Governors take on Eastern Illinois, Saturday, they will return to the Dunn Center for the final home game of the season, when they host a 5:30pm, Thursday, contest against Morehead State.

After finishing tenth in the Ohio Valley Conference a season ago, the Panthers of Eastern Illinois were tabbed to finish in the same place in both the OVC Coaches and SID Preseason Poll and the OVC Media Preseason Poll. The Panthers have started OVC play by going 10-5, which puts them in a tie for fourth place in the league.

On the defensive end, Eastern Illinois averages an OVC-best 10.9 steals per game. The Panthers have recorded 284 steals this season, led by Pace who has posted 56 steals on the season. Kira Arthofer has also recorded 49 steals this season, which is tied for fifth best in the OVC.

This is the 51st meeting in a series that dates back to 1995; the Governors lead the all-time series 29-21, but have lost the last two meetings. The Govs have not lost three-straight games to the Panthers since a three-game losing streak that lasted from January 21st, 2012 to February 24th, 2011.

Saturday’s contest will be played at Lantz Arena in Charleston, Illinois, where Austin Peay State University has won three-straight games and is 14-10 all-time.

Austin Peay State University welcomed EIU to the Dunn Center for a February 1st contest, which saw the Governors fall to the Panthers, 76-47.


What To Watch For

The Govs have not won four-straight OVC games since a four-game winning streak that lasted from January 13th to January 24th, 2014.

The Governors are looking to end a two-game losing streak to Eastern Illinois, and win their fourth-straight game at Lantz Arena,

The APSU Govs defense is averaging 21.1 turnovers forced per game, which ranks 16th in the country and leads the Ohio Valley Conference.

The APSU Govs are 1-of-7 teams in the country that has attempted 720-plus triples this season, and are 1-of-12 teams that have made 225 or more threes this season.

With 42 made three-pointers this season, Shay-Lee Kirby [2] is two made triples away from passing her teammate, Maggie Knowles [5], for the third most three-pointers made in a freshman season in program history.

Maggie Knowles [5] is shooting 45.6 percent from three-point range this season, which leads the OVC and ranks 8th in the NCAA. She currently is the Austin Peay State University career three-point percentage leader, shooting 42.6 percent in her career.