Auburn, AL – The Tennessee Vols men’s basketball team hits the road for a Saturday afternoon matchup with No. 13 Auburn. Tipoff inside Auburn Arena is slated for 11:00am CT on CBS.

Saturday’s game can be seen on CBS, online through CBS Sports Live, which can be accessed here [1] and on any mobile device through the CBS Sports App. Spero Dedes and Clark Kellogg will have the call.

Fans can also listen in on their local Vol Network affiliate to hear Bob Kesling [2] and Bert Bertlekamp describing the action. 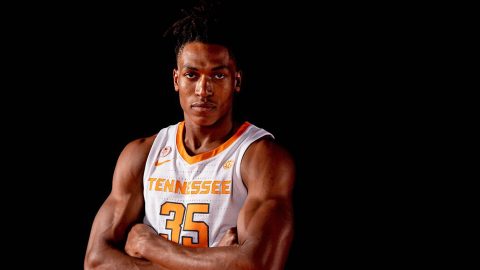 Last time out, the Vols battled past Vanderbilt to sweep the season series against the Commodores for the third consecutive season.

UT was led by senior Jordan Bowden [3] and junior John Fulkerson [4] who scored 17 points each.

Junior Yves Pons [5] upped his blocks streak to 26 consecutive games with at least one rejection and is now just eight blocks away from break UT’s single season blocks record.

A victory on Saturday would give the Vols their third victory over an opponent ranked inside the AP Top 25 and would be Tennessee’s first true road win over a ranked team, since Feb. 6, 2018 when the Vols took down No. 24 Kentucky inside Rupp Arena.

Up next, Tennessee hits the road for its second consecutive road bout, when it travels to Fayetteville for a rematch with SEC foe Arkansas. Tipoff is set for 7:30pm CT on SEC Network.

The Tigers have a 28-23 edge when the series is played in Auburn.

Tennessee has won 11 of the last 15 meetings in the series.

Give the Vols three victories this season over opponents ranked in the AP Top 25.

Stand as UT’s first true road win over a ranked opponent since the Vols beat #24 Kentucky at Rupp Arena on February 6th, 2018.

Tennessee has five regular-season games left on its schedule, and those opponents combine to own a 76-28 (.731) record and an average NET rating of 33.3.

Due to Auburn hosting the 2020 SEC Swimming & Diving Championships, the UT basketball travel party is split between three hotels during its stay on The Plains.

Jordan Bowden [3] is the only active Vol who scored the last time UT faced Auburn. He had 10 points in that March 17 loss in Nashville.

Tennessee ranks second among Division I teams in assist percentage, having assisted on 64.7 percent of its field goals this season.

SEC Defensive Player of the Year candidate Yves Pons [5] has blocked at least one shot in every game this season. He leads the SEC and ranks 20th nationally with 2.6 bpg. His 2.7 bpg during SEC play also leads the league.

Freshman point guard Santiago Vescovi [9] has made at least one 3-pointer in every game in which he’s appeared (14), averaging 2.2 made threes per game.

Barring injury or illness, senior guard Jordan Bowden [3] will finish his career in the top five on Tennessee’s list for career games played. Saturday will be the 128th game in which he’s appeared.

Heading into Saturday’s contest on The Plains, Auburn is coming off back-to-back road losses to Missouri and Georgia. The Tigers were without freshman forward Isaac Okoro in both games.

Okoro is currently averaging 13.1 ppg and 4.8 rpg, both of which ranked second on the team prior to his injury.

Auburn currently sits in second in the SEC with a 9-4 mark in league play and a record of 22-4 overall. Auburn began the year 15-0 and was one of two undefeated teams remaining in Division I as January reached its midpoint. All of this comes one year after the Tigers won the 2019 SEC Tournament and played their way to the program’s first-ever Final Four appearance.

In the paint, the Tigers have seen solid production from senior center Austin Wiley. Wiley is averaging 10.5 ppg, which ranks third on the team, and his team-leading 9.4 rpg rank second in the SEC, trailing only Mississippi State’s Reggie Perry.

Auburn University was not given its current name until 1960. From its opening in 1856 through 1960, the institution went through multiple name changes which included the East Alabama Male College and the Alabama Polytechnic Institute. Its name officially changed to Auburn in 1960 after the Alabama Legislature granted it university status. Its new name better expressed the expanded curriculum the school had been offering for years.

The Vols played one of their least efficient games of the season on the offensive end, turning the ball over 17 times. That led to 21 points for Auburn. The Tigers rained 3-pointers to keep the momentum in their favor, connecting on 15 long balls.

Tennessee’s offense went cold in the first half, going on a seven-minute scoring drought and missing 10 consecutive shots. UT was up early on the Tigers with a 17-13 lead.

Auburn capitalized on its opportunities and swung the momentum in its favor. While the Vols struggled on offense, the Tigers rattled off a 16-0 run to take a commanding 13-point lead. On the defensive end, AU forced the Vols into 12 turnovers and held the Big Orange to 32 percent shooting from the floor. At the break, Auburn held a 32-23 advantage over the Vols.

Vols junior Lamonte Turner [11] was hot early on, scoring eight points behind a pair of 3-pointers in the first four minutes. He finished with a season-high 24 points on 7-of-12 shooting and four 3-pointers.

The only success UT found in the opening period was on the glass, where it held a 26-19 advantage and limited Auburn to just four offensive rebounds.

Despite the loss, Tennessee players were recognized for their play throughout the tournament, as Williams and All-SEC wing Admiral Schofield [13] were named to the 2019 SEC All-Tournament Team.

Yves Pons [5], the SEC’s leading shot-blocker, has blocked at least one shot in every game this season.

His streak of 26 straight games with at least one block is the longest such streak by a Vol since at least the 1988-89 season (research is ongoing).

Pons has blocked three or more shots in 15 games this season, including a program-record-tying six-block effort against Jacksonville State on December 21st.

With five regular-season games left to play, he already ranks second on UT’s single-season blocks list. The record is 73, by C.J. Black in 1997-98.


We Love A Packed House

Dating to the start of last season, Tennessee has played 19 games in front of sold-out—and sometimes over-capacity—crowds.