Charleston, IL – A thrilling ending was befitting of a one-point game that featured 12 lead changes and 13 ties, but in the end, the Austin Peay State University (APSU) women’s basketball team came up just short, as they dropped a heartbreaker in the final seconds of regulation to Eastern Illinois, 73-72, Saturday at Lantz Arena. 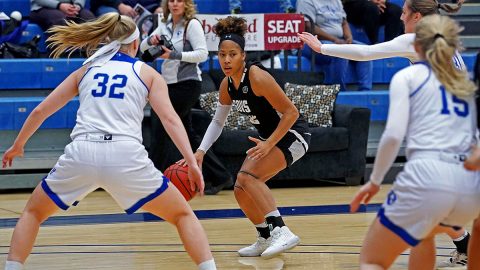 It was one of the slowest starts to a game for the Governors this season, who trailed 8-0 after a pair of Abby Wahl free throws with 5:22 left in the first quarter.

The Govs would not find their way onto the scoreboard until the 3:33 mark in the first quarter, when a Brianah Ferby [1] offensive rebound led to a Shay-Lee Kirby [2] three-pointer.

The Kirby three-pointer broke the levee for the Govs, who poured on 14-3 run to close the first quarter. The run was highlighted by Brianah Ferby [1] and Maggie Knowles [3] three-pointers, as the Knowles triple with five seconds left gave the Governors a three-point advantage after one quarter, despite not scoring for the first 6:27 of the contest.

The second quarter marked the beginning of the back-and-forth affair that would occur for the next 30 minutes. On the first possession of the quarter, Karle Pace connected on a three-pointer for the Panthers to tie the game. Brianah Ferby [1] answered immediately, connecting  for three of her team high 16 points on the next trip down the floor to retake the lead for the Govs.

The lead changed hands four more times before halftime, with the final lead change coming when Knowles drilled her second three-pointer of the game with 17 seconds left in the half to give the Governors a 30-27 lead at the break.

The start of the second half saw Austin Peay State University build their biggest lead of the day, when Brianah Ferby [1] hit another triple out of the break to put the Govs up six. But the lead didn’t last for long, as the Panthers stormed back to tie the game at 37 with 6:24 left in the third.

A quarter that started with the APSU Govs building their biggest lead of the day ended with the Govs trailing by their biggest margin since Eastern Illinois led 8-0 to start the game. The Panthers ended the third quarter on a 5-0 run, and after thirty minutes of action they held a 51-45 lead.

The Governors faced their biggest deficit of the day early in the fourth quarter, as a Lariah Washington three-pointer put the Panthers up by nine points just 18 seconds into the final frame. But just like both teams had done all day, the Governors answered with a comeback of their own, starting with an Ella Sawyer [5] triple on the very next Austin Peay State University possession.

With 6:06 left in the contest, the Governors still trailed by seven, but Knowles third three-pointer of the day sparked a 10-3 run that would span the next 3:28 of the game. The run was capped off the same way it started, a Knowles three-pointer with 2:38 left that tied the game for the tenth time.

But as soon as the Govs tied the game, the Panthers stretched their lead back to five with just over a minute to play. But it wasn’t over yet, as D’Shara Booker [6] kicked to a wide-open Brandi Ferby [7] for three points to cut the deficit back to just two points. After the Governors got a stop on the defensive end, Sawyer found Booker in the paint, as the redshirt freshman got the hoop and the harm, before converting an old-fashioned three-point play to give the Govs a one-point advantage.

With 11 seconds left, Eastern Illinois retook the lead once again, as an Abby Wahl layup gave the Panthers a 71-70 lead. But still, this one was not over yet, because Sawyer drew a foul with seven seconds left and converted a pair of free throws to put the Govs back up one.

However that was the last lead the Govs would hold, as Eastern Illinois drew another foul and hit a pair of free throws with 1.6 seconds on the clock to take the lead for the final time. A half court heave from Brianah Ferby [1] was offline at the buzzer, as the Govs dropped a heartbreaker to the Panthers, 73-72.

The Govs have dropped three-straight games to Eastern Illinois for the first time since a three-game losing streak that lasted from January 21st, 2012 to February 18th, 2013.

Austin Peay State University forced their opponent to turn the ball over 30 times for the third time this season, but it was the first time this season the Govs have lost in a game where they forced 30 turnovers.

The APSU Govs only turned the ball over 16 times and outscored Eastern Illinois 26-7 in points off of turnovers.

For only the third time this season, the Governors fell after leading a game at halftime.

Brianah Ferby [1] scored a season-high 16 points to lead the Governors in scoring for the second time this season.

Brandi Ferby [7] dished out four assists to lead the Govs in helpers for the eighth time this season.

Arielle Gonzalez-Varner [9] pulled down seven rebounds to lead the APSU Governors on the glass for the 15th time this season and the 38th time in her career.

Maggie Knowles [3] knocked down four three-pointers, it was the seventh time this season she has hit at least four triples in a game.

The Austin Peay State University women’s basketball team will be back in action with the final home game of the season, when they welcome Morehead State to the Dunn Center for a 5:30pm, Thursday contest. After the Govs take on the Eagles, they will make the short trip north for a 5:00pm, Saturday game against Murray State in the regular season finale.