Clarksville, TN – With a pair of games left in the regular season, the Austin Peay State University (APSU) women’s basketball needs just a single win to clinch their spot in the Ohio Valley Conference Women’s Basketball Championship, with the first chance coming when the Governors host a 5:30pm, Thursday, Senior Night game against Morehead State at the Dunn Center. 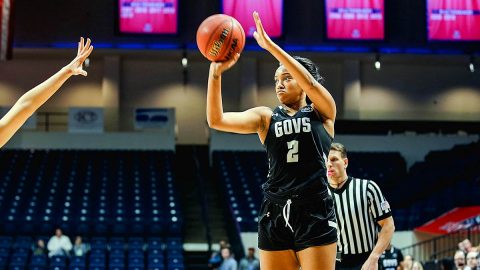 Entering the final week of the season, the Governors sit in seventh place in the OVC with a 7-9 conference record; while Morehead State and Murray State are tied for the eighth and final spot in the postseason with 6-10 records.

The APSU Govs are set to square off with both Morehead State and Murray State in the final week of the season, creating a simple postseason scenario for Austin Peay State University – win and you’re in.

Game sponsor Coca-Cola will be giving away water bottles, and fans can use the promo code OVC for $5.00 general admission tickets and $12.00 reserved tickets; pre-purchasing tickets online with the promo code also will enter fans to win two free all-session tickets to next week’s OVC Tournament.

About the Morehead State Eagles

After finishing as the regular-season runner up in the Ohio Valley Conference a year ago, the Eagles of Morehead State were picked to finish in fourth place in the OVC Media Preseason Poll; but the Eagles were tabbed to finish seventh in the OVC Coaches and SID Preseason Poll. The Eagles are 6-10 in OVC play, and are tied with Murray State for the final spot in the OVC Tournament.

One of the top shot blocking teams in the entire country, the Eagles lead the OVC and rank third in the NCAA with 175 blocked shots this season. Morehead State averages 6.3 blocked shots per game, which is the sixth-best mark in the NCAA and leads the OVC.

The Eagles shot blocking attack is led by the trio of Ariel Kirkwood, Orlandra Humphries, and Jaleesa Avery — the only trio of teammates who all rank in the top-ten in the OVC in blocked shots.  Kirkwood leads the league and ranks ninth in the country with 79 blocked shots this season; she also ranks 12th nationally, blocking 2.82 shots per game. Humphries has blocked 30 shots this season which ranks seventh in the OVC, while Avery sits in eighth with 27 blocked shots.

Morehead State has struggled from three-point range this season, shooting 26 percent from deep, which is the second-worst percentage in the OVC. The Eagles rank 10th in the conference with just 129 made three-pointers this season.

On the offensive end the Eagles are led by Jazzmyn Elston, who averages 11.1 points per game. Despite her team’s struggles from behind the arc, Elston averages 1.7 made three-pointers per game, which ranks 11th in the OVC.

This is the 82nd meeting in a series that dates back to 1977; the Governors trail in the all-time series 40-41, but have won back-to-back games against Morehead State. If the APSU Govs can pick up their third-straight win over the Eagles, it will mark the longest winning streak in the series since Austin Peay State University beat Morehead State three times in 2009.

At Johnson Arena in Morehead, Kentucky, Austin Peay State University picked up an 84-75 win over Morehead State, on February 14th, 2019.

A quartet of Governors scored in double-figures against the Eagles, led by Keisha Gregory [5], who connected on a pair of three-pointers and 11 free throws en route to a 21 point performance. Brianah Ferby [6] added another 14 points, with a pair of triples and going 6-for-6 at the charity stripe.

Arielle Gonzalez-Varner [2] posted a double-double for the APSU Govs, scoring 12 points and grabbing 13 rebounds. Finally, Brandi Ferby [7] chipped in a dozen points for the Governors, while also dishing out a team-high five assists.

For Morehead State it was the duo of McKenzie Calvert and Aliyah June, who posted 27 and 24 points for the Eagles in the losing effort.

If the APSU Govs advance to the postseason, it will mark the second longest streak of postseason appearances in program history, behind an 11 -year streak that lasted from 1993-94 to 2003-04.

Another trip to the OVC Tournament would equal the fifth in five years for head coach David Midlick [9], and would give him the second longest streak of consecutive tournament appearances by a head coach in program history.

With 239 made three-pointers this season, the Governors need to connect just two more times from three-point range to match the single-season team three-point record (241 made 3FG) set by the 2018-19 team.

The APSU Govs defense is averaging 21.4 turnovers forced per game, which ranks 12th in the country and leads the Ohio Valley Conference.

The Governors lead the OVC and rank 21st nationally with a plus 5.19 turnover margin.

A win would give the Governors their third-straight win over Morehead State, the longest streak in the series since they beat the Eagles three times in 2009.

With 43 made three-pointers this season, freshman Shay-Lee Kirby [10] is tied for the third most three-pointers in a freshman season at Austin Peay State University – matching her teammate Maggie Knowles [11] who made 43 triples in her freshman campaign a year ago.

Ella Sawyer [12] is the only Governor to have started in all 27 games this season, she also leads OVC freshman in assists with 75 this season.

For more information on joining the Governors in the Dunn Center this winter, to secure season tickets or to become involved with the Monocle Society, call 931.221.PEAY. You can also purchase tickets online at www.LetsGoPeay.com/buytickets; [14] be sure to access the new 360-degree view of the Dunn Center when purchasing tickets.