Clarksville, TN – I’ve been in marketing long enough to have seen some classic battles in my day.  Ford vs. Chevy, Coke vs Pepsi, McDonald’s vs. the world.

I’ve written, produced, voiced, edited and everything else you can do to a commercial, so I tend to view them differently than most people.  I enjoy very FEW commercials, because I can see or hear just how BAD they really are.

Seldom do I see one brand go after another brand so openly as a recent ad from Harley-Davidson, which read;  “Honestly now, did you spend your youth dreaming of someday owning a Polaris?” 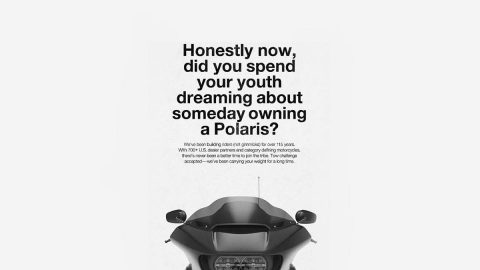 I thought it was great, and not because I ride a Harley, or have anything against another brand, I just thought it was a bold “shot across the bow” to one of their competitors who has been “chirping” quite loudly of late.

Let me be clear so as to not stir up any feathers.  I’m not paid by Harley, I almost bought an Indian, but for me, it was always going to be the Harley experience.  I got into this lifestyle late in life, so I haven’t had the years of experience that some have had in making their choices.

If I live long enough, I will probably own an Indian at some point.  I’ve ridden them and I like them.

To be honest with you, I would be riding a Gold Wing if they were more comfortable.  They’re just not for me.  I think Honda makes a superior motorcycle, but let’s face it, Harley is always going to be the focus of ANY argument about bikes.  People either LOVE them or HATE them.

Now, a little back story on this ad by Harley Davidson.

Indian has introduced a line of touring bikes with bigger engines and accessories to rival the Harley touring bikes.  I’m not going to bore you with all the ins and outs, but you know what I’m talking about.

(I’ve added a couple of links about the two companies below).

The Indian touring bikes look AWESOME and my Indian brothers (no pun) swear by them.  My “Wingers” love their bikes and, not that I would know personally, apparently they’re cheaper to maintain.

Most Harley guys are committed to the brand and that’s all there is.  That’s great, because in this world of motorcycles and lifestyles, there’s something for everyone.

Polaris owns Indian and when they bought the brand, Indian needed cash and financial backing.  It’s worked so far, so let the games begin.

Harley Davidson has been struggling over the last few years and are trying to maintain their view “from the top.”  The “old school” biker is dying out BUT, all of the manufacturers need to build a younger customer who can sustain them for the years to come.

I want them ALL to be successful because competition is GREAT for you and me.  Options on what to ride are important to the consumer.  The problem I see is maintenance costs.  There’s not much difference between Harley and Indian in the service department.

Labor costs per hour are similar, and their schedule for service is about the same.

But to be honest with you, as a marketing guy, I LOVED this ad by Harley and can’t wait to see if Indian/Polaris will “engage”