The Lady Vols are tied for sixth place in the SEC standings with LSU at 8-6, residing two games ahead of Alabama, Florida and Georgia (6-8). Arkansas and Kentucky are a game ahead in a tie for fourth (9-5). 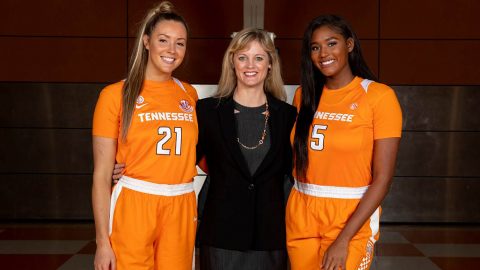 Tennessee snapped a five-game losing skid on Sunday during its toughest stretch of the season, staving off Vanderbilt in Knoxville, 67-63. Ole Miss enters in 14th place in the league and carries a 14-game losing streak into the contest after entering league play with a 7-6 non-conference record.

The Lady Vols’ final three games (Vandy, Ole Miss, Auburn) of the regular season are vs. teams that aren’t ranked. Those come after UT fell to top-25 schools in four of its previous five games. Two of those foes were ranked in the top 10.

Thursday’s game will be streamed by SECN+ with Andy Brock (PxP) and Madison Blevins (Analyst) handling the call.

A link to the live audio stream can be found on each game’s Hoops Central page or the Lady Vol schedule on UTSports.com [1].

All of the games included in the ESPN package (ESPN, ESPN2, ESPNU) and the SEC Network will be available through WatchESPN, accessible online at WatchESPN.com [2], on smartphones and tablets via the WatchESPN app, and streamed on televisions through Amazon Fire TV, Apple TV, Chromecast, Roku, Xbox 360 or Xbox One to fans who receive their video subscription from an affiliated provider.

They will be honored prior to the game in an on-court ceremony that begins at 5:40pm CT or with 15:00 minutes remaining on the pregame countdown clock.

Brown, a 6-3 forward from Melbourne, Australia, is a graduate transfer from Washington State who received a sixth year of eligibility from the NCAA after a knee injury prevented her from playing a year ago in her first season at Tennessee. She has started 26 of 27 games for the Lady Vols this season and has been a steadying force for a young team.

Brown earned a degree in sport management from WSU in May 2018. At UT, she is working toward completion of a master’s degree in communication and information with emphasis in journalism and electronic media.

Harris, a 6-3 forward from Hampton, Ga., has played in a career-best 25 games for the Lady Vols this season. Recruited for her interior defensive abilities, Harris’ improved shooting range has allowed her to become more of a scoring threat this season.

After seeing limited minutes in her first three years, Harris moved from center to forward and has doubled her minutes played and enjoyed career statistical highs in every category.

Harris earned a degree in recreation and sport management from UT in May 2019. She now is working toward completion of a master’s degree in communication and information with emphasis in journalism and electronic media.

Tickets for Thursday’s game start at $5,00 and are available at AllVols.com [6].

Want to be the Jr.Vol of the Game? Sign up for the Jr.Vol Club today and get the chance to see yourself on the video board. Members also receive free Jr.Vol swag, tickets to games for all sports, and exclusive Jr.Vol events.

High-Five the Lady Vols: Kids 12 & younger can pick up a wristband at the Fan HQ table on the concourse to participate in the pregame high-five tunnel. Wristbands are limited. To purchase discounted group tickets and reserve wristbands for your team, call 865-946-7000.

You can be a part of the Lady Vols’ electric introductions. Make sure to download our light show app courtesy of Coca-Cola. The “Hoops Hype” app is available free of charge from the Apple Store or on the Google Play Store.

A Closer Look At Tennessee

The Tennessee Lady Vols’ only losses this season are to nine teams that appear destined for NCAA Tournament bids. Seven of those were ranked, including four that were top-10 ranked teams, when UT played them.

While UT beat Notre Dame when the Irish carried a No. 15/14 ranking, the most appealing win on the résumé currently appears to be the home triumph over LSU on January 26th.

In the February 24th edition of Bracketology, Charlie Creme has the Lady Vols listed as a No. 11 seed, playing sixth-seeded Princeton in the NCAA First Round in Evanston, IL, as part of the Dallas Regional. The winner would meet No. 3 Northwestern or No. 14 Bucknell in the second round.

The Lady Vols surpassed their 2019 SEC win total of seven with a victory over Vanderbilt on Sunday. They take aim at clinching a winning record in league play as well as meeting last year’s season win total of 19 as Ole Miss visits The Summitt for the penultimate game of the regular season.

UT had won six straight SEC contests and stood at 7-1 before dropping five consecutive contests prior to the triumph over Vandy.

Horston has come off the bench the last three outings and has produced 10.7 ppg. and 5.0 apg.

Ole Miss has struggled in SEC play, giving up 74.9 ppg. while scoring 49.1 ppg. and shooting 33.6 percent from the field while allowing a 45.9 percentage.

The Rebels have been close to breaking through twice, falling at Florida, 74-72, on February 13th and to Alabama, 57-56, on February 2nd.

After facing Ole Miss, the Lady Vols will close out the regular season on Sunday at Auburn (3:05pm ET/2:05pm CT). That date features whip-around coverage on the SEC Network.

The SEC Tournament is next. It will be held at Bon Secours Wellness Arena in Greenville, SC, March 4th-8th.

Ole Miss will close out its season at home vs. in-state rival Mississippi State on Sunday afternoon.

Tennessee did not begin the season in either the AP or USA TODAY Coaches polls.

UT was picked sixth by the media and seventh by the coaches in the 2019 SEC Preseason Polls.

Six of UT’s 12 players this season had never played in this program before.

AFTER all of the preseason picks were made, one of UT’s two returning starters, Zaay Green [13], was lost for the season after two games due to a torn ACL.

With Green’s season-ending injury, Tennessee has lost five of its top six players from a year ago.

Notes From The Vanderbilt Game

Hot Start Horston
Jordan Horston [10] got off to a fast start on Sunday, hitting three of four attempts in the first quarter and six of 10 in the first half to lead UT with 14 points at the break. She finished with 16 for the game, marking her best scoring effort since dropping 19 on Alabama on January 20th.

Double-Double Davis
With 18 points and 10 rebounds against Vanderbilt, Rennia Davis [8] recorded her 27th career double-double. She is now just two double-doubles away from tying Bashaara Graves for 10th all-time among Lady Vols.

Lou Takes Charge
Lou Brown [3] took her 11th charge of the season against VU. She accounts for 11 of the 15 charges taken by UT this season and is just one charge away from tying the team total of 12 from the 2018-19 season.

Picking Pockets
UT had six players combine for nine steals against Vanderbilt, tying the team high for the most steals by the Lady Vols in SEC play this season.

Turn ‘Em Over
The Tennessee Lady Vols forced 20 turnovers against Vandy, besting their previous SEC high of 17 turnovers forced. It is the third time this season Tennessee has forced 20 or more turnovers.

This will mark only the third meeting in which neither of the teams has been ranked in the AP or USA Today Coaches Polls.

The Lady Vols have won 18 straight over the Rebels in Knoxville, with the last Ole Miss victory (69-65) coming on January 31st, 1987, in Stokely Athletics Center.

The Big Orange had been unable to reach 70 points in six of its last seven trips to Oxford until rolling up 81 and 84 in consecutive victories at The Pavilion at Ole Miss in 2019 and 2020.

On January 9th, 2020, Tennessee held Ole Miss to 28 points, which tied for the third fewest UT has allowed in a game and the fewest by an SEC foe.

The Rebels scored only 14 points in the second half of that game, which was the sixth fewest ever tallied in the final 20 minutes by a UT opponent. Ole Miss’ two fourth-quarter points tied for second fewest ever in a quarter by a Big Orange foe.

Tennessee junior Rennia Davis [8] has played well against Ole Miss in three contests, averaging 16.0 points and 7.0 rebounds vs. the Rebels.

The Rebels returned one starter and four total letterwinners from last season’s squad that went 9-22 overall and 3-13 in the SEC (12th).

Ole Miss was projected to finish 13th in both the 2019-20 preseason SEC coaches and media polls.

Second-year head coach Yolett McPhee-McCuin is in the midst of a rebuild in Oxford and planted seeds for the future with a 2020 signing class that ranks No. 13 in the nation, per espnW HoopGurlz.

A season-best offensive showing in the third quarter helped bridge the gap, but the Ole Miss women’s basketball team was never able to overcome a slow first half as Missouri pulled away toward an 82-67 win on Sunday in Columbia.

Missouri (8-19, 5-9 SEC) was able to stymie the Rebel offense to just 16 points and a 19.4 percent clip from the field in the first half, which would prove to be all the distance the Tigers would need.

Junior Rennia Davis [8] led the Lady Vols (12-3, 2-1 SEC) with 17 points, seven rebounds and five assists. Freshman Jordan Horston [10] narrowly missed a double-double, finishing with 11 points, nine rebounds and seven assists. Freshman Jessie Rennie [16] also was in double figures with 11 points, shooting a perfect 3-of-3 from behind the arc and 2-of-2 from the free-throw line.

Ole Miss (8-8, 0-3 SEC) was paced by Dominique Banks with 12 points and Jayla Alexander with nine.

Freshman forward Rennia Davis [8] tied her career high with 18 points and senior forward Jaime Nared [17] recorded her eighth double-double of the season to lead the 10th-ranked Tennessee women’s basketball team to a 75-66 victory over Ole Miss on January 25th, 2018, at Thompson-Boling Arena.

The Lady Vols held the Rebels to just 37 percent shooting and finishing the game with a 20-4 edge in fast-break points.

Nared’s 15-point, 10-board double-double was the 17th of her career, while Davis matched her season-best scoring output from the Alabama State game on December 3rd.