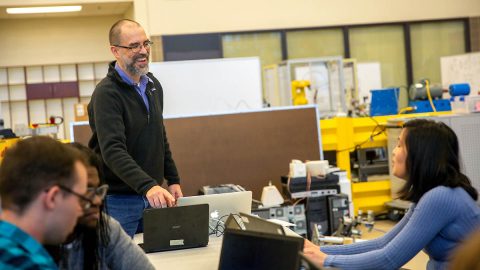 “I’ve been meeting a lot with a number of teachers in the local school system, and it takes you all of two seconds to realize how big robotics is in the schools around here,” said Dr. John Nicholson, an associate professor in the department.

“I’ve been volunteering to judge some of the robotics competitions, and those competitions are just as dramatic as any football or basketball game,” Nicholson stated.

“There’s a high interest in those students.”

One competition – FIRST Lego, in which K-12 students use motorized Lego elements to build robots – lists 15 school-based teams, for example, in Montgomery County.

“It’s clear from the competitions that these kids love playing with robots,” Nicholson said. “We want to show these students that you don’t have to quit being interested in that sort of thing when you leave grade school, middle school or high school.

“That can continue on.”

Austin Peay State University recently introduced a concentration in intelligent robotics to its Bachelor of Science in computer science and last fall launched two new classes: Robotics I and II. The first group of students are taking Robotics II this semester. 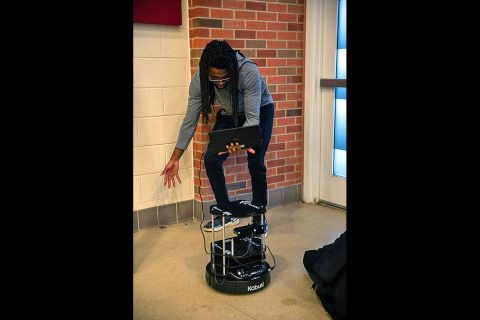 “Robotics is a very multidisciplinary field,” Nicholson said. “The APSU Department of Engineering Technology has a robotics class for robots that would be used in manufacturing, more constrained environments.

“The classes that I’m teaching are more for autonomous robots,” he continued. “The environment can change, and the robots have to live in it.”

The seven students in this semester’s class are learning just how hard it is to get a robot to move through an unfamiliar space, just as humans maneuver new places every day.

Robots fascinate student Quynh Tran, who wants to someday use what she’s learning in class to help people with disabilities.

“It’s fascinating how robots learn to do things,” Tran said. “They are like babies; you have to be very specific in giving instructions. As humans, there are many simple tasks we don’t think about that require many chains of decisions.”

“When humans enter a new environment, they move around while starting to build a map mentally,” Nicholson said. “If you enter a building enough, you’ll eventually know the layout, if you need to go right or left to go to the bathroom.

Nicholson’s students recently worked on how their robots use computer vision to see colors, depth and other helpful indicators. The students soon will work on how robots can map their environments so they can avoid walls and furniture.

“I’m most excited for learning about computer vision,” said student Kenneth Shipley, who also worked outside of class with Nicholson to build a Mars rover model. “Last semester, we had a project to make the robot drive around several mazes. We did this by programming in the path for each maze manually.

“Computer vision will allow the robot to make the decisions on its own and try to navigate the maze by itself,” he added.

Nicholson hopes that by the end of the semester, the students’ robots will be able to enter an unfamiliar campus building, roam the halls and map the floor plan (much like a human would.

On the way to that goal, the students are learning about the Robotic Operating System, odometry (the study of distances) and OpenCV (a library to help computer vision recognize images), among other robotics basics, student Joseph Spear said.

“I am looking forward to developing a comprehensive program that will make the robot search and find a specific object based on machine learning algorithms,” he said. “I would like to train the robot to understand what a red ball looks like through various trials, and then let the robot go in a boxed area full of different colored balls and find all of the red balls in the area.”