Clarksville, TN – With a single game left in the regular season, Austin Peay State University women’s basketball knows they will be in the Ohio Valley Conference Women’s Basketball Championship, but they do not know what seed they will be; as the Governors could be anywhere from the No. 6 to the No. 8 seed, depending on the outcome of a 5:00pm, Saturday, First Financial Bank Battle of the Border contest at Murray State. 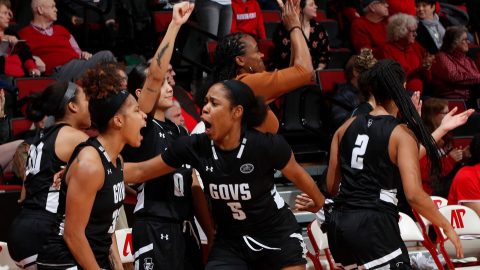 The Govs clinched their sixth-straight trip to the OVC Tournament with a 70-65, Senior Night win over Morehead State last time out.

With the Eagles of Morehead State eliminated from postseason contention; Austin Peay State University, Jacksonville State, and Murray State will spend the final day of the regular season jockeying for position in the final three spots of the OVC Basketball Championship.

This season, the Racers have been led by sophomore Macey Turley, a Preseason All-OVC selection. Turley is the only player in the OVC that ranks in the top-four in scoring (16.6 ppg) and assists (4.4 apg). Turley’s is one-of-three players in the OVC with 100-plus assists this season, and her 103 helpers rank second in the league. But Turley has not played in the Racer’s last two games and is out for the remainder of the season with an injury.

The Racers are one of the top three-point shooting teams in the OVC, ranking third in the league in made three-pointers (209) and fourth in three-point percentage (32%). The Racers have also attempted 653 triples this season, which is the fifth most in the conference. The Murray State three-point attack is led by a trio of Racers who all rank in the top-14 in the OVC in three-pointers made per game – Turley (2), Lex Mayes (1.8), and Macie Gibson (1.6)

The duo of Laci Hawthorne and Alexis Burpo are the only pair of OVC teammates that both rank in the top-five in the conference in rebounding.  Hawthorne’s 9.1 rebounds per game is good for second-best in the league, while Burpo’s 8.1 boards per game is tied for fourth.

This is the 91st meeting in a series that dates back to 1977; the Governors and Racers are tied in the all-time series 45-45, but the Govs have won three of the last four match-ups. Austin Peay State University has more wins and more games played against Murray State than any other opponent in program history.

After trailing for the first 32:58 of the contest last time out against Murray State, Austin Peay State University completed a double-digit comeback by outscoring the Racers 26-15 in the fourth quarter, en route to 69-61 win in the Dunn Center on February 13th.

Brandi Ferby [2] led the way for the Governors, splashing four three-pointers on her way to a game-high 20 points. Ferby did most of her damage in the first half, scoring 13 points in the first 20 minutes to help keep the Govs within striking distance.

The comeback effort was led by Arielle Gonzalez-Varner [3], as the senior from the Queen City scored 12 of her 18 points in the fourth quarter to complete the comeback win. Maggie Knowles [4] also added 10 points for the Governors, connecting on a pair of fourth quarter three-pointers to help the APSU Govs erase the Racer’s lead.

With a single game left in the regular season, Austin Peay State University has clinched a spot in the OVC Women’s Basketball Championship, but the Govs could still be anywhere from the No. 6 to No. 8 seed.

By beating Morehead State, the APSU Govs locked in their sixth-straight trip to the postseason, marking the second-longest streak of consecutive postseason appearances in program history.

Austin Peay State University will be playing on Leap Day for the sixth time in program history. The Governors are 2-3 all-time on February 29th, but have won back-to-back Leap Day contests.

With 244 made three-pointers this season, the Governors have broken the single-season team three-point record — which was previously held by the 2018-19 squad, who connected on 241 triples.

The Govs defense is averaging 21.4 turnovers forced per game, which ranks 12th in the country and leads the Ohio Valley Conference.

The APSU Governors lead the OVC and rank 19th nationally with a plus 5.32 turnover margin.

The Govs are 1-of-7 teams in the country that has attempted 780-plus triples this season, and are 1-of-12 teams that have made 240 or more threes this season.

Austin Peay State University has attempted a program record 783 three-pointers this season, eclipsing the previous mark set by the 2018-19 team, who shot 743 three-pointers a season ago.

Maggie Knowles [4] leads the OVC and ranks 10th in the NCAA this season, shooting 44.4 percent from three-point range.

With 44 made three-pointers this season, freshman Shay-Lee Kirby [8] has eclipsed her teammate Maggie Knowles [4] for the third-best three-point shooting season by a freshman in program history – Knowles connected on 43 three-pointers during her freshman campaign.

Ella Sawyer [9] is the only Gov to have started in all 28 games this season, she also leads OVC freshman and ranks 15th in the conference with 75 assists this season.

For more information on joining the Governors in the Dunn Center this winter, to secure season tickets or to become involved with the Monocle Society, call 931.221.PEAY. You can also purchase tickets online at www.LetsGoPeay.com/buytickets; [10] be sure to access the new 360-degree view of the Dunn Center when purchasing tickets.