Murray, KY – In what would prove to be the biggest win on the road at Murray State in Austin Peay State University (APSU) women’s basketball history, freshman Ella Sawyer [1] scored a career-high 26 points and connected six times from three-point range to lead the Governors to a 29-point, 88-59 win over the Racers in the regular-season finale, Saturday, at the CFSB Center. 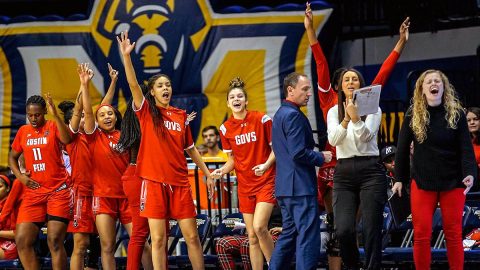 After leading the Govs with a then career high 21 points against Morehead State on Thursday, Sawyer outdid herself in the regular season finale; going 3-for-3 from downtown in the first quarter.

Maggie Knowles [2] and Tahanee Bennell [3] each added another triple, as the Govs buried five threes to build a seven-point advantage after ten minutes of action.

The second quarter of action saw Murray State shoot 50 percent from the floor, but the Govs were still able to build their first double-digit lead of the day when a Brandi Ferby [4] steal led to a Sawyer layup on the other end. With 1:13 left before the break, the Governors still held a ten-point advantage, but the Racers closed the half on a 4-0 run and Austin Peay State University held a 40-34 lead after 20 minutes.

At halftime, Sawyer had already knocked down a career-high four three-pointers and racked up a game-high 16 points. But the halftime break didn’t cool off the freshman from Australia, as she drilled her fifth three-pointer of the day just 1:23 into the second half to give the Govs an eight-point lead. But the Racers would not go away yet, as they shrunk the Austin Peay lead to just three points with 4:25 left in the quarter.

Leading by just three, the Governors responded with an 8-0 run by Sawyer and Brandi Ferby [4] that took just 1:20 off the clock. Sawyer started the run with a pair of free throws, then on the next possession she connected on her sixth triple of the day off an assist from Ferby, and finally, Ferby capped off the run with a three of her own.

After the Racers cut the lead back to single-digits, Maggie Knowles [2] and Nieja Crawford [5] got in on the Austin Peay three-point barrage, drilling triples on back-to-back possessions to stretch the lead to 15. Then on the next possession, Myah LeFlore [6] grabbed and offensive rebound and scored on a put back to give the Govs a 17-point advantage – their largest of the day so far.

Crawford capped off the 12-0 run with her second three-pointer of the day to put the Governors up by 25 points with 5:28 left in the contest. In the fourth quarter it was the APSU Govs defense that led the charge, as the Racers shot 16.7 percent from the floor and turned the ball over seven times.

On the road in a rivalry game, the Governors made sure to leave no doubt, closing the game on an 8-0 run that was capped off by a LeFlore jumper to give the Govs a 29-point win over Murray State in the First Financial Bank Battle of the Border.

In the 91st all-time meeting between Austin Peay State University and Murray State, the Govs retook the series lead and now lead the Racers 46-45 in the all-time series.

The Governors swept the season series against Murray State for the first time since 2012.

Austin Peay State University’s 29-point win over the Racers is the biggest win on the road in Murray, Kentucky, in program history.

The Governors posted an 18-11 record this season, which is the best mark they have posted in David Midlick [9]‘s five years at the helm.

Austin Peay State University has now won three-straight games on Leap Day, and the Governors are 3-3 all-time on February 29th.

With 14 made triples, the Governors extended their single-season team three-point record to 258 made threes.

The APSU Govs shot 42.4 percent from three-point range, which is their best single-game percentage in Ohio Valley Conference play this season.

Austin Peay shot 47.1 percent from the floor, the Govs are now 8-0 this season when they shoot upwards of 45 percent in a game.

The Govs bench outscored the Racer’s reserves 39-6, and Austin Peay State University is now 16-5 this season when they outscore the oppositions bench

Austin Peay State University outscored Murray State 39-6 off of turnovers, the Govs are 17-6 this season when they win the points off turnover battle.

Sawyer’s 26 points is the most by an Austin Peay State University freshman since Brianah Ferby [10] scored 28 points as a freshman at Belmont, January 20th, 2018.

Nieja Crawford [5] scored in double-digits for the second-straight game, marking the second time this season she has posted back-to-back games in double-figures.

Myah LeFlore [6] scored a season-high nine points off the bench for the Govs.

The Austin Peay State University women’s basketball team will start their sixth-straight Ohio Valley Conference Women’s Basketball Championship with a 3:00pm, Wednesday, game against the defending-champion and No. 2 seeded Belmont Bruins. It will be the first ever postseason meeting between Austin Peay State University and Belmont, who won both regular-season meeting against the Govs.